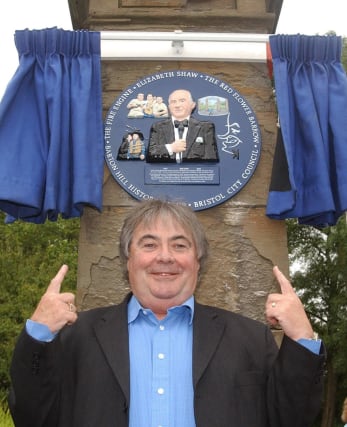 The family of Eddie Large have spoken of their sadness at not being able to visit the comedy giant in the days before his death after he contracted coronavirus in hospital.

The Little And Large star, whose partnership with Syd Little was watched by millions in the duo’s heyday, died aged 78 after being infected what his family described as “this horrible disease” while being treated for heart failure.

Comedy stars Sir Lenny Henry, Paul Chuckle, Ant and Dec and Matt Lucas were among the first to pay tribute.

His son Ryan McGinnis posted on Facebook: “It is with great sadness that mum and I need to announce that my dad… passed away in the early hours of this morning.

“He has been suffering with heart failure and unfortunately, whilst in hospital, contracted coronavirus, which his heart was sadly not strong enough to fight.

“Dad fought bravely for so long. Due to this horrible disease we had been unable to visit him at the hospital but all of the family and close friends spoke to him every day.

“We will miss him terribly and we are so proud of everything he has achieved in his career with Syd and know that he was much loved by the millions that watched them every week.”

His agent Peter Mansfield told the PA news agency: “His family were very sad not to be able to be in the same room as him, touching him, in the last week because of coronavirus.

“They were only able to speak on the phone, which was obviously very sad for them.

“But they wanted to say thank-you to the NHS which was fantastic throughout.”

Speaking about the life-saving heart transplant and treatment the comedian underwent many years ago, Mr Mansfield said: “The family wanted to say how grateful they are for the extra 17 years that they have had with Eddie. And a huge thank-you to the donor and the donor’s family.”

In 2010, Large, who was famous for interrupting his co-star, revealed he had not spoken to Little for some time.

“I haven’t seen Syd for years. He lives up near Blackpool and I live near Bristol, so I haven’t spoken to him for a long time,” he told TV Times.

Ant and Dec were among a host of stars paying tribute to Large on Twitter, writing: “So sad to hear about the passing of Eddie Large.

“We had the pleasure of working with him and Syd a few years ago. He just loved making people laugh. He will be missed. Our thoughts are with his family at this time.”

Chuckle wrote: “RIP the very talented Eddie Large. Such a funny and lovely man. Love goes out to his family at this time.”

Matt Lucas wrote: “Eddie Large (along with his supersonic friend Syd) was really lovely and kind and encouraging to me when I was a nipper on Shooting Stars. So sad to hear of his passing.”

He added: “They finished part one. I’d never heard laughter like it. Rude, raucous and rollicking. Dunno how they did it, but Eddie’s energy and electricity and impressions and props and improv were hugely impressive. R.I.P.”