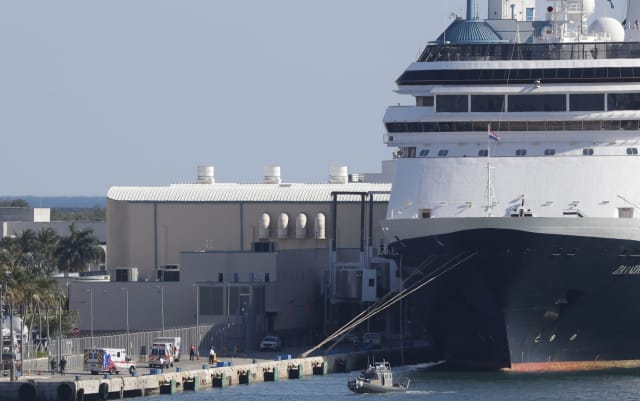 A cruise ship on which four people have died, including a 75-year-old British man, has docked in a port in Florida – after previously being denied entry.

The cruise-ship Zaandam, which was carrying 200 Britons, recorded nine confirmed cases of Covid-19 on board as well as around 200 people who reported flu-like symptoms.

Earlier this week the ship offloaded its healthy passengers onto its sister-ship, the Rotterdam, which has now also been given permission to dock.

Operating company Holland America said that following arrival in Port Everglades, all guests would be health screened and also cleared for entry by US Customs and Border Protection.

It added that disembarkation is expected to be completed by Friday evening, with priority given today to those who need immediate care.

President Donald Trump has said that arrangements have been made with the UK Government to evacuate British passengers.

It came after the family of John Carter, who was one of the four people who died, pleaded for Mr Trump and Florida officials to allows the two ships to dock.

“She is struggling to eat the limited meals and is feeling unwell,” the family said.

“She is obviously distressed and extremely frightened.

“They were both in good health and did not foresee the terrible situation that has arisen.

“John became unwell aboard the ship and passed away on March 22 2020.”

The cruise liners attempted to dock in Florida earlier this week but became embroiled in a dispute, with local authorities reluctant to take more patients into a state healthcare system already stretched by the coronavirus outbreak.

However, Mr Trump said on Wednesday there was no choice but to allow the ships to dock and for those aboard to disembark.

Speaking at the daily White House coronavirus briefing, Mr Trump said that the US had a duty to accept the passengers “from a humane standpoint”.

“We don’t have a choice. I don’t want to do that but we have to. People are dying,” he said.

Foreign Secretary Dominic Raab said that the Government was “determined to help Britons stranded abroad” and that it would “work with British Airways to keeps flights running, so travelling Brits can get back to the UK”.

The latest development regarding the two cruise ships come as authorities in Mexico allowed 46 British citizens to disembark from another cruise ship off its Caribbean coast and fly home on Wednesday.

Before Mr Trump’s comments on Wednesday, local authorities in Broward County, Florida, one of the locations the ship has been denied permission to dock, had urged the US government to intervene in the case.

Michael Udine, commissioner of Broward County, said: “Decisions with international implications should not be left to local officials to make piecemeal solutions during a global crisis.

“We need experts from the CDC and Fema to do their jobs and outline a plan that takes the passengers out of limbo and does not play politics.”

Florida governor Ron DeSantis told a news conference on Tuesday that the state’s healthcare resources were already stretched too thin by the coronavirus outbreak to take on the Zaandam’s caseload.

“Just to drop people off at the place where we’re having the highest number of cases right now just doesn’t make a whole lot of sense,” he said.