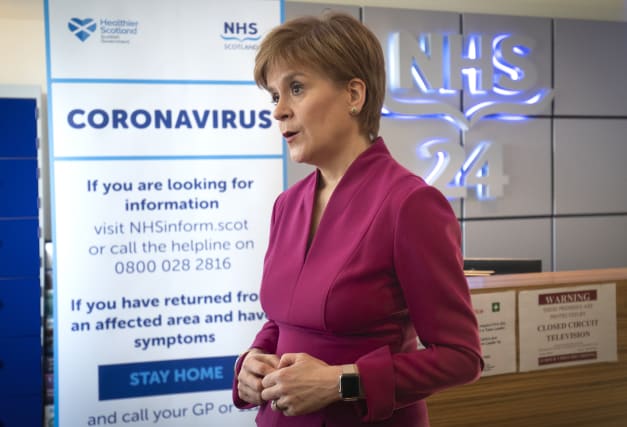 A total of 126 patients have now died in Scotland after testing positive for coronavirus, the Scottish Government has confirmed.

The figure is a rise of 50 from 76 on Wednesday, although First Minister Nicola Sturgeon said the total includes 40 deaths that “should be distributed over a number of days” as they had “not previously been notified due to delays in family liaison”.

Official statistics show 2,602 people have now tested positive for the virus in Scotland, up 292 on the previous day.

The First Minister said 162 people are in intensive care with Covid-19, up 15 from Wednesday’s figure.

She added a new reporting system will be put in place, meaning the daily figure of confirmed deaths will not rely solely on health boards but will also include data from the National Records of Scotland (NRS) death registration process.

As of next week, NRS will also begin to report on deaths when Covid-19 is mentioned on death certificates.

The First Minister said the Scottish Government is trying to be as “transparent as possible”.

She said there have been “significant” steps taken to get personal protective equipment (PPE) to health workers.

Health Protection Scotland (HPS) will also be issuing new guidance on how PPE is distributed, she added.

Ms Sturgeon was also clear on what testing “can and cannot achieve”.

Current tests, she said, can identify cases of Covid-19 but will be unable to detect the virus in the incubation period or if someone has previously had it.

The Scottish and UK Governments are working on a more thorough antibody test, she said.

While, 3,400 NHS staff and their families have been tested to date, Ms Sturgeon said simply testing key workers and their families would not mean they would be able to go back to work, as many tests would simply confirm they had the virus.

Also speaking at the briefing, chief medical officer Catherine Calderwood said compliance with lockdown measures could mean they are lifted in three months.

She said: “What we do know from the scientific evidence is that if people are stringently obeying these new rules, these very difficult rules … we are then able to slow the spread of this transmission.

“The more we comply, the better that those measures are going to reduce the transmission of the virus and that length of time, at least 13 weeks, we would be able to lift some of those measures potentially after that three month period.”

Patel: No new target date for migrant crossings to be ‘infrequent phenomenon’