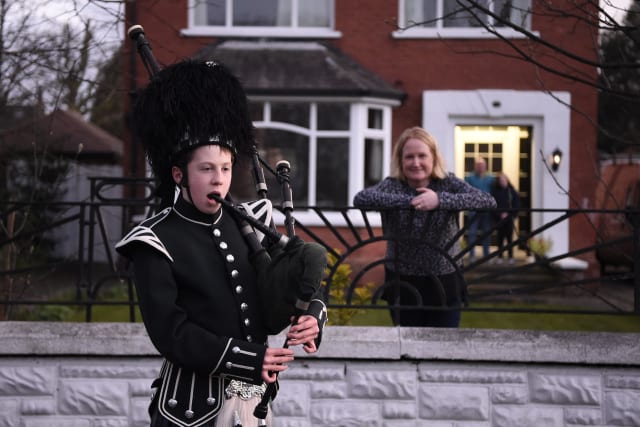 A healthcare worker was left in tears after a 12-year-old neighbour played the bagpipes outside her house as a thank you to the frontline staff helping in the battle against coronavirus.

Jill Scott had never met George Orchin before he arrived at her front door on Thursday evening and started playing Amazing Grace.

They live at opposite ends of a Belfast street but she often hears the Campbell College pupil practising the pipes in his garden on her way to work in the Ulster Clinic.

Mrs Scott decided to post a note through the Orchin family’s letterbox on Thursday morning asking if George, who is a member of his school band, would play for the whole street at 8pm as people across the UK and Ireland applauded for healthcare workers.

Dressed in full pipe band regalia, George responded to the request with a performance at Mrs Scott’s door.

“I’ve heard George play Amazing Grace up the road on my way to work sometimes and I left a note and asked him would he come out this evening and play some of his bagpipes to the neighbours to support all the people in the NHS and also all the key workers, people driving for Sainsbury’s, the binmen, everybody in Northern Ireland that are pulling together,” she told the PA news agency.

“I was upstairs and I didn’t realise and then all of a sudden I heard Amazing Grace and I said ‘oh my goodness, George has come to play Amazing Grace to me’ and I started to cry. It was emotional.

“I was just so delighted that people are out there supporting everybody in healthcare and all the key workers are out here trying to help everybody during this time of trouble.”

George said he and his friends had been playing in the evenings in the hope of cheering people up.

“We decided to play for people to try to lift their spirits during these times,” he said.

“It’s great because I get to comfort people in a way that I really enjoy. I find it a lot of fun.”

His mother Louise Orchin said the family was delighted to receive the unexpected request.

“I was very proud that she had heard him and took the time to come up and actually acknowledge his playing,” she said.