NHS to receive 30 extra ventilators but ‘hundreds’ more to follow 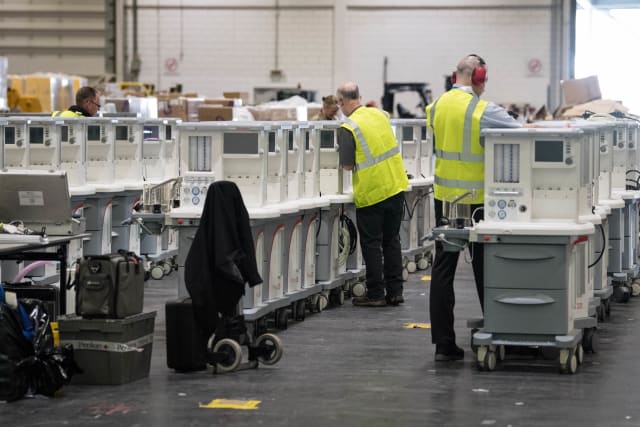 The NHS will be sent 30 new ventilators next week – but the Government has promised “hundreds” more will follow.

It is thought at least 30,000 ventilators will be needed to cope with the peak of the coronavirus pandemic, with manufacturing companies including Dyson, Siemens and Rolls Royce involved in a drive to produce more.

There are 8,000 ventilators currently being used across the NHS in the UK, with those suffering the most severe Covid-19 symptoms hooked up to the machines to help them breathe.

The Downing Street announcement about extra ventilators comes after a senior US official criticised the availability of the life-saving machines in Britain.

Dr Deborah Birx, the White House’s coronavirus response co-ordinator, told reporters on Tuesday: “I don’t know if you heard the report this morning, there are 8,000 ventilators in the UK.

“If you translate that to United States, that would be like the United States having less than 40,000 ventilators. We have five times that.”

Number 10 confirmed 30 extra ventilators will be delivered to the NHS next week from medical company Penlon as part of a consortium including Ford, Siemens, Mercedes, McLaren and Meggitt.

The Penlon machine, which has been rapidly adapted from other existing ventilator designs, has been approved by the Medicines and Healthcare products Regulatory Agency (MHRA).

The Prime Minister’s official spokesman said: “As Michael Gove set out last night, we would hope to see the first ventilators from this batch being delivered to the NHS next week.

“I think we expect that first batch to be up to 30 ventilators, with hundreds more from that particular consortium to follow in the coming weeks.

“That’s just one of the consortiums that we’ve partnered (with) – there are thousands more ventilators in the pipeline from other manufacturers and suppliers who are rapidly working on new devices.”

The Cabinet Office said the Penlon device is based on elements found in the company’s current range of CE safety marked products and “meets the rapidly manufactured ventilator system specification”.

A spokesman added: “It is a fully intubated mechanical ventilator designed to provide support to critically ill patients with a range of functions including volume and pressure controlled ventilation.”

The Government this week also gave the go-ahead for the NHS to order 10,000 continuous positive airway pressure (CPAP) devices, which are less invasive than ventilators and used extensively in Italy and China during efforts to tackle the pandemic, after the health regulator approved modified use on Covid-19 patients.