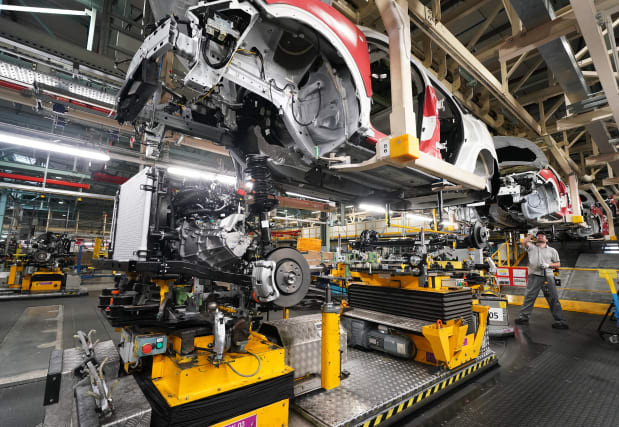 UK manufacturers had their worst month for eights year in March as the economy was ground down by efforts to contain the spread of coronavirus across the world.

Manufacturing output fell to its worst extent since July 2012, according to the data from IHS Markit and CIPS.

The closely watched Manufacturing Purchasing Managers’ Index (PMI) fell to 47.8 in March, down from 51.7 the month before. If the sector scores below 50 it means that it is contracting.

Direct disruption from Covid-19 created a perfect storm, along with lower market confidence and companies shutting down to slow production and new business, the survey found.

Meanwhile employment in the manufacturing sector fell at its fastest rate since July 2009, shortly after the financial crisis.

“The effects were felt across most of manufacturing, with output falling sharply in all major sectors except food production and pharmaceuticals. The transport sector, which includes already-beleaguered car-makers, suffered the steepest downturn,” said Rob Dobson, director at IHS Markit.

He added: “With restrictions aimed at slowing the spread of the virus expected to stay in place for some time, expectations of further economic disruption and uncertainty meant business optimism slumped to a series-record low. However, on a slightly more positive note, manufacturers still expect to see output higher in one year’s time.”

Duncan Brock, at the Chartered Institute of Procurement & Supply (CIPS), said that closed borders, big delays to shipping and reluctant clients led to a massive decline and pushed business optimism to historical lows.

“The manufacturing sector was knocked sideways by the impact of Covid-19 and into contraction territory, experiencing some of the most challenging trading conditions since PMI records began,” Mr Brock said.

However, economists warned that things might actually be a lot worse than the results show.

“The PMI likely greatly understates the pace of the downturn now under way in the manufacturing sector,” said Samuel Tombs at Pantheon Macroeconomics.

He added: “For a start, the PMI perversely is boosted by supply chain disruption … Longer waits usually imply that demand has increased faster than supply, though that isn’t the case at the moment.”

Almost nine out of 10 responses to the PMI survey were sent in before March 20, before schools closed.

“Responses received between March 20 and 26 were consistent with a 41.0 output index, the lowest level since February 2009,” Mr Tombs said.