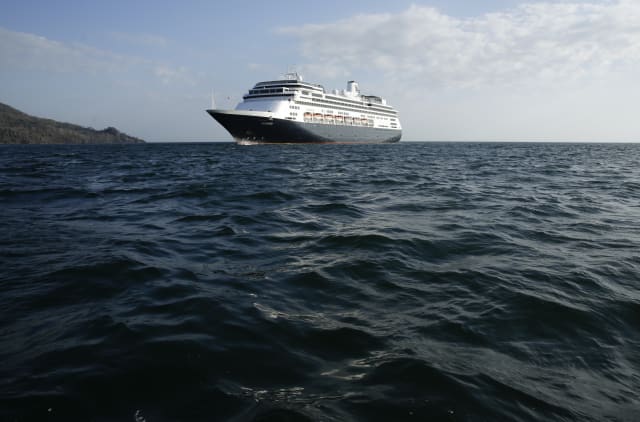 The family of a British man who died on board a coronavirus-stricken cruise ship have pleaded with US president Donald Trump and Florida authorities to allow the ship to dock.

John Carter, 75, was one of four people to die on the Zaandam cruise ship, which is currently embroiled in a bitter dispute over plans to disembark passengers in the US.

His widow has been isolated and on her own since his death.

Mr Carter’s family say they have only had minimal contact with her as her mobile phone is no longer working.

“She is struggling to eat the limited meals and is feeling unwell.

“She is obviously distressed and extremely frightened,” they said in a statement.

The family added that it was “imperative” that the docking is authorised so that the passengers and crew can receive “the urgent assistance that they so desperately need”.

“They were both in good health and did not foresee the terrible situation that has arisen. John became unwell aboard the ship and passed away on the 22nd March 2020,” they said.

“We do not know the cause of his death at present.”

Local authorities in Broward County, Florida, one of the locations the ship has been denied permission to dock, have also urged the US Federal Government to step in.

Michael Udine, commissioner of Broward County, said: “Decisions with international implications should not be left to local officials to make piecemeal solutions during a global crisis.

“We need experts from the CDC and Fema to do their jobs and outline a plan that takes the passengers out of limbo and does not play politics.”

But Florida governor Ron DeSantis told a news conference on Tuesday that the state’s healthcare resources were already stretched too thin by the coronavirus outbreak to take on the Zaandam’s caseload.

“Just to drop people off at the place where we’re having the highest number of cases right now just doesn’t make a whole lot of sense,” he said.

The Zaandam, which is carrying more than 200 British nationals, and its sister ship the Rotterdam, passed through the Panama Canal on Monday.

Both ships, which are owned by Holland America, are seeking to dock in Florida later this week.

Company president Orlando Ashford wrote an opinion column in the South Florida Sun Sentinel newspaper to plead with officials and residents to let the passengers disembark.

“The Covid-19 situation is one of the most urgent tests of our common humanity,” he wrote.

“To slam the door in the face of these people betrays our deepest human values.”

The Zaandam originally departed from Buenos Aires on March 7, a day before the US State Department advised against cruise travel and before any substantial restrictions were in place in Florida.

The ship had been scheduled to stop in San Antonio, Chile, then complete another 20-day cruise to arrive in Fort Lauderdale, Florida, on April 7.

But since March 15, the Zaandam has assumed pariah-like status, having been denied entry at a succession of ports.

It comes as authorities in Mexico allowed 46 British citizens to disembark from a cruise ship off its Caribbean coast and fly home on Wednesday.

“After close work between (the UK, Mexico and TUI) 46 Britons from Marella Explorer 2 landed in UK tonight after (Britain) helped 141 Mexicans return home.

Crowds flock to beaches and train stations ahead of lockdown easing