Concerns over the supply of antimalarials in fight against Covid-19 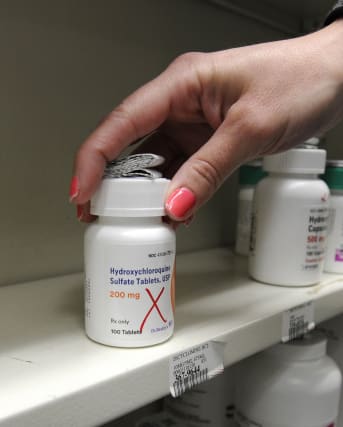 Ethics and the availability of drugs need to be considered as part of any attempt at the widespread use of antimalarials in the fight against coronavirus, Italian doctors have said.

Clinical trials are being conducted on chloroquine and hydroxychloroquine to gauge what benefits they might have in treating Covid-19.

The drugs are normally used against malaria and for certain autoimmune diseases such as rheumatoid arthritis, and concerns have been raised as to whether there would be enough of a supply should they be used for coronavirus too.

In a letter published in the Annals of the Rheumatic Diseases, Italian doctors pose a number of questions about the possible use of the drugs – referred to as CQ and HCQ – during this global pandemic, including whether they could be used as preventative measures.

The doctors, from Sapienza University in Rome, note that the drugs have been around for a long time and used safely for their prescribed purpose up until now, but acknowledge the lack of wider scientific evidence on their benefits when it comes to coronavirus.

The letter states: “Is it ethical to propose CQ or HCQ for preventing the spreading of Covid-19 without any data coming from evidence-based medicine?

“Is it permissible to take a controlled risk in the event of a pandemic?

“In such a case: would it be reasonable to consider antimalarials as primary prophylaxis in healthy subjects living in highest risk regions or, at least, to use them in those tested positive for Covid-19 but still asymptomatic?”

It adds: “Waiting for supportive data from clinical trials, the scientific community is moving towards pre-emptive use of antimalarials.”

The doctors sign off by saying that if “mass prophylaxis” became an accepted approach worldwide it would raise the question as to whether there is enough of a supply to sustain it.

Consideration must be given to the potential implications for people who already use the drugs for rheumatic diseases, said the European League Against Rheumatism (EULAR), which co-owns the Annals of the Rheumatic Diseases with the British Medical Journal (BMJ).

EULAR President, Professor Iain McInnes, welcomed global scientific efforts to research the use of both drugs in fighting Covid-19, but warned the knock-on effects must be taken into account.

Prof McInnes said: “EULAR is concerned, however, that the diversion of drug supplies away from people with rheumatic and musculoskeletal diseases may compromise the health of this important and sizeable group of patients in Europe and beyond.

“A balanced approach that meets the imperatives of the ongoing pandemic, but which also takes account of the needs of patients already taking these drugs is essential.”

EULAR’s patient membership group (PARE) is calling on the drug manufacturers to quickly step up production to meet a projected surge in demand.

US President Donald Trump has hailed the potential of hydroxychloroquine, telling a press conference last month: “I feel good about it.”

An Oxford-led research team this week said research partly conducted by them showed it appeared to be safe at the levels it is currently prescribed for conditions like rheumatoid arthritis.

But the team cautioned that there is a lack of data on its safety when used at higher doses, and its effectiveness against Covid-19 is still unknown.