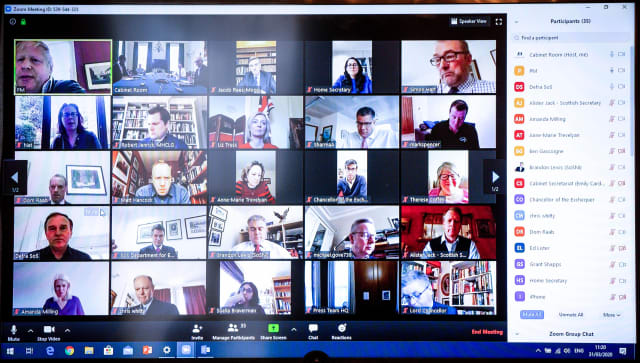 The Cabinet ministers dialled in to the meeting instead of sitting around the table in 10 Downing Street as part of social distancing measures to curb the spread of coronavirus.

Downing Street would not be drawn on the software involved, but previous examples of videoconferencing in Number 10 appeared to show Zoom being used.

Concerns have been raised about the apparent use of Zoom after the use of the software by Ministry of Defence staff was suspended last week while “security implications” were investigated.

The Prime Minister’s official spokesman said: “I don’t think we have named the particular video conferencing tool that we have been using, but as you would imagine we ensured that it was done in a secure way.”

Downing Street was “following all necessary security procedures” and “I am happy to say with confidence we were satisfied it was secure”, the spokesman added.

Apart from Cabinet Secretary Sir Mark Sedwill and a small number of officials, all participants in the meeting logged on remotely.

Mr Johnson and Health Secretary Matt Hancock are both self-isolating after testing positive for coronavirus.

At the Cabinet meeting, Mr Johnson said “the situation is going to get worse before it gets better – but it will get better”.

Updates on the Government’s coronavirus response were given by videoconference by chief scientific adviser Sir Patrick Vallance and Professor Whitty.

The Downing Street spokesman said: “The PM said the rising death toll in recent days showed the vital importance of the public continuing to stick to the social distancing guidance which has been put in place by the Government, based on scientific and medical advice.

“The message to the public is: stay at home, protect the NHS, save lives.

“The PM said that the situation is going to get worse before it gets better – but it will get better.”