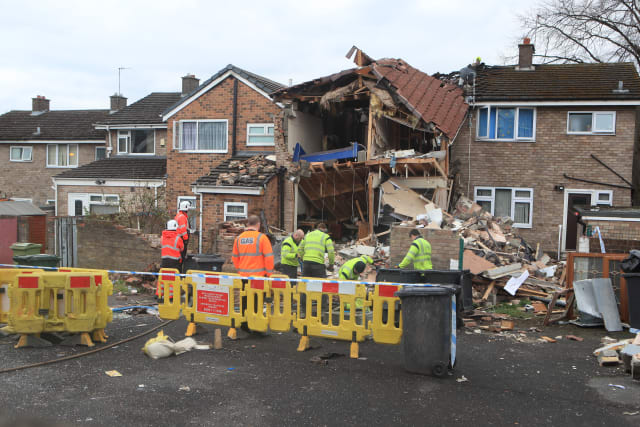 Two men have been injured in an explosion, which has caused “significant damage” to a house in Dewsbury.

A 55-year-old man, who was in the property on Crescent Walk, in Ravensthorpe, at the time of the blast is being treated in hospital for serious injuries.

Another man is receiving treatment after he was struck by debris at the scene.

Neither man’s injuries are believed to be life-threatening, West Yorkshire Police said.

Emergency services, including five fire crews, police, ambulance and specialist teams, were called to the house at 11.37am on Tuesday.

A police spokesman said: “Officer and fire and ambulance services attended the incident in which it was apparent a property had suffered significant damage and was on fire.

“A 55-year-old man in the house was taken to hospital to be treated for serious injuries caused by the incident.

“The injuries are not thought to be life-threatening.

“Another male, who suffered a head injury after being struck by debris, was treated at the scene.

“He was later taken to hospital for further treatment to the injury, which is not life-threatening.”

West Yorkshire Fire and Rescue Service are investigating the cause of the fire.

A spokeswoman said: “We got a call at 11.37 this morning to reports of an explosion at a domestic property in Crescent Walk, in the Ravensthorpe area of Dewsbury.

“We sent along crews from Mirfield, Dewsbury, Rastrick, Ossett, and Morley.

“We also sent out technical rescue crews from Cleckheaton, and an aerial appliance from Wakefield.

“We’ve also got search and rescue dogs attending at the scene as well.”

She said: “We deployed our hazardous area response team, two ambulance and a clinical supervisor to the scene.

“Two patients have been conveyed to hospital for further treatment.”

A picture of the property posted on Twitter appears to show that the explosion has destroyed the front wall of the house, leaving the interior exposed.

A fire is burning inside the house, with flames coming through the collapsed roof.

People posting on social media reported hearing the explosion, with some saying that it shook their own houses.