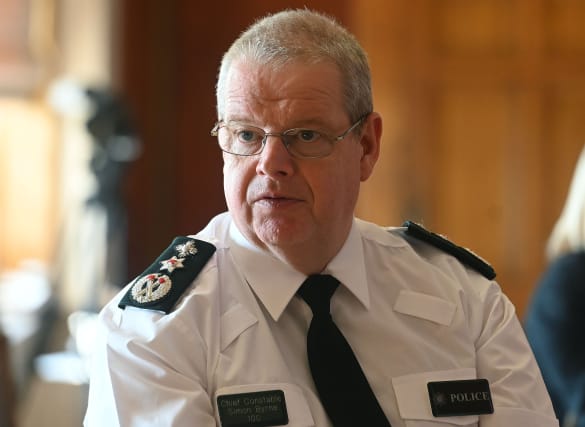 Investigations into incidents in the region’s troubled past will be paused amid the coronavirus crisis, Northern Ireland’s chief constable has announced.

Simon Byrne has also announced the introduction of spit and bite guards for some officers on the frontline.

The chief constable announced the temporary changes in a video posted on the PSNI’s Twitter feed on Tuesday.

He said officers and staff working on legacy were being transferred to bolster numbers as police worked to resume normal service amid the pandemic.

Mr Byrne said that over the last weekend officers dealt with more than 2,700 calls which included domestic abuse incidents and missing people.

“We have taken the decision to temporarily suspend all legacy investigations and release the officers and staff to provide immediate resilience to the PSNI’s critical policing functions,” he said.

“We of course understand that this will be difficult for the families that have lost loved ones and it’s important to say that we recognise the continuing distress this decision will cause to many people who have suffered as a result of the Troubles.

“This is a temporary measure and we will keep our decision under review as the current situation develops.”

The PSNI’s legacy unit is dealing with more than 1,000 unresolved cases.

The chief constable also announced that spit and bite guard equipment was being made available to some officers for their protection.

There have been several incidents of police officers being spat or coughed at by people claiming to have Covid-19.

The guards, made of mesh and plastic and placed over the head of a person who is threatening to spit or bite officers, were to be deployed in custody suites, it was announced last week.

Mr Byrne said their use will be in line with human rights, videoed where possible, and the circumstances referred to the Police Ombudsman.

“Given the unique and exceptional circumstances we face, I intend to make spit and bite guard equipment temporarily available to those dedicated Covid officers and those using cell vans, as well as people working in custody suites,” he said.