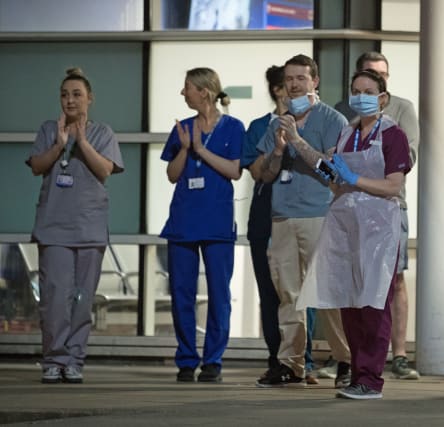 A host of ex-ministers and senior MPs have backed a campaign to provide the families of NHS front line “heroes” with compensation if they die in the fight against Covid-19.

A senior collection of cross-party backbenchers – including ex-police minister Mike Penning, former health minister Dan Poulter and Sir Charles Walker, joint vice-chair of the influential Conservative Party 1922 Committee – have added their names to a call for Boris Johnson to offer financial support to loved ones of NHS workers in the event of their death.

Ear, nose and throat consultant Amged El-Hawrani, aged 55, became the first doctor to be recognised by the NHS as having died after contracting coronavirus from his patients following his death at Leicester Royal Infirmary on Saturday.

The Royal College of Physicians (RCP) has confirmed that about one in four NHS doctors are off work sick or in isolation while the Health Care Supply Association (HCSA) has warned of “serious supply issues” in personal protective equipment in hospitals.

In their letter to the Prime Minister, co-ordinated by Liberal Democrat MP Layla Moran, 50 MPs have united in calling for an armed-forces style compensation package for NHS workers who lose their lives.

They wrote: “Those on the front line of this battle against coronavirus are heroes.

“However, the risks to themselves and their families that they are taking on a daily basis are not recognised as much as they should be.

“We are writing to you to call on the UK Government to create a coronavirus compensation scheme for those who, as dedicated and committed professionals, are bravely putting themselves in harm’s way to protect us all.”

The group of MPs argued that those who die after contracting the illness from patients should be eligible for payment to their families, on top of their pension benefit.

A contribution should also be made to their funeral costs, they told the PM, with the scheme providing a lump sum payment, guaranteed income for the family and child payments to those eligible under 18-years-old.

Ms Moran, who is set to run in the postponed Lib Dem leadership race next year, said 1,150 members of the public had also signed up to her campaign.

The bid to secure compensation follows a Daily Mirror campaign to give a medal to those NHS workers putting their lives in jeopardy to battle Covid-19.