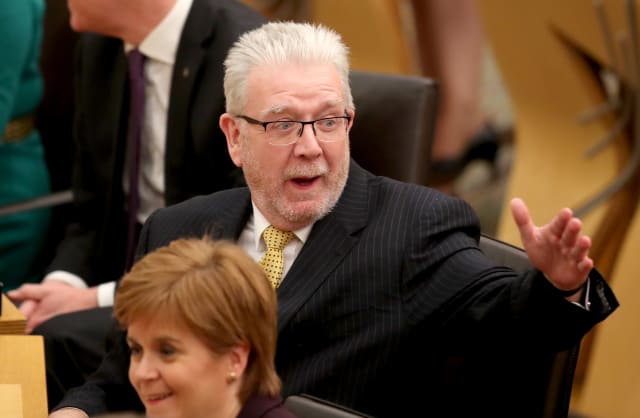 Cross-party consensus in the Scottish Parliament has been “essential” in creating planned new emergency legislation to help the country deal with the coronavirus pandemic, according to Mike Russell.

The Cabinet Secretary for the Constitution will announce new measures on Tuesday before the Coronavirus (Scotland) Bill is debated at Holyrood on Wednesday.

Speaking to BBC Radio Scotland’s Good Morning Scotland programme, he paid “enormous tribute” to the civil servants who have managed to get the Bill ready within a week of it being announced.

Addressing the emergency powers the new legislation proposes, Mr Russell said it was also essential “to tell the people of Scotland when these are being used, how they are being used and be accountable for their use”.

He said: “We have involved the opposition parties very fully in this and continue to do so – that’s not normal in a government bill but it’s absolutely essential there is a consensus across the parliament and we’ll keep on doing this.

“These aren’t normal times. We need to put aside normal politics and we have to find a way for all of us to agree on the right measures to take forward.”

He added: “Essentially what we’ve discovered as we’ve gone along with this is there are some things that we regard as quite normal in a normal day of government administration which simply can’t be done.

“We’ve had to trawl right through government to find out the things that simply cannot be done, things that would distract from the absolute priority of dealing with the pandemic and then make sure we have the powers to do that.

“We are in an emergency, these are emergency measures, they will also lapse so we have to arrange to report to the parliament and the public on how these are being used and make sure we can get rid of them at the earliest possible moment.

“The procedures we have in here will last six months and could be renewed twice but I hope it won’t be necessary to renew them but we have to be sensible about this and therefore we felt that’s the right thing to put in the Bill.

“But all that will be debated at Holyrood tomorrow.”

The Bill will cover a wide variety of areas including special measures for court trials which would normally go before a jury, and safeguarding tenants from eviction.

“There can be little worse than imagining in the midst all of this insecurity that you’re not secure in your home as well. We have to be absolutely sure that we do everything we can to make sure people are secure in their homes.

“There is the suspension of statutory time limits, a lot of issues to do with the serving of documents and being served electronically, there are issues with community payback orders – those clearly can’t take place in the way they’re doing at present and we have to deal with those.”