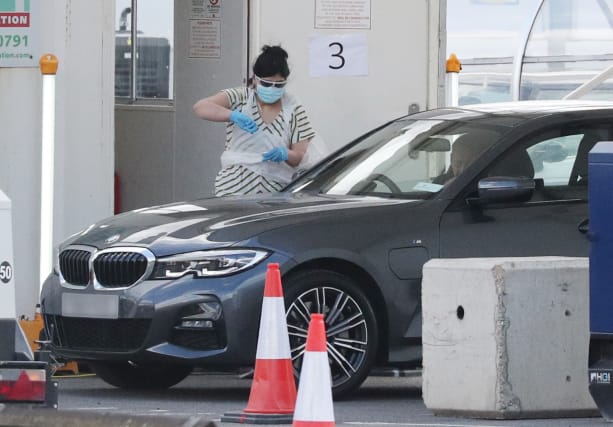 The Government has said the UK must go “further, faster” to ramp up the coronavirus testing capacity, but where can you get one and who is first in the queue?

But the latest Public Health England figures show that fewer than 10,000 tests per day are currently being carried out, compared to 70,000 per day in Germany.

Here’s what we know about testing so far:

Tests have so far been focused on those admitted to hospital, with anyone with milder symptoms told to self-isolate at home.

It means many people, including frontline healthcare workers, could be isolating for no reason after contracting ordinary seasonal ailments like coughs and colds.

The self-isolation instruction is also in force if someone in your home suffers symptoms that could be Covid-19.

But the Government has vowed to rapidly increase testing for healthcare staff after it emerged that around one-in-four of the workforce are off sick or self-isolating.

Professor Yvonne Doyle, medical director of PHE, has also admitted doctors could be spreading the disease to patients while not displaying symptoms, since it can take three to five days for anyone infected to show outward signs in the majority of cases.

Some experts think mass testing of the community must be a priority in order to ease the lockdown restrictions.

Anthony Costello, professor of global health and sustainable development at University College London, said mass testing would give the country a “control mechanism” to lift the lockdown without having to wait until effective drugs or a vaccine has been found.

– What does the test involve?

A test for those suspected to be suffering from Covid-19 involves a deep swab of the nose or the back of the throat. These are sent off to a lab to be analysed for the genetic sequence particular to the coronavirus.

But a blood test can be used for patients believed to have had the condition and since recovered.

The finger-prick test identifies the antibodies produced inside you to fight off an infection, indicating that the patient may have near-immunity from the disease for at least 28 days.

There have been reports of people being reinfected, but these are rare.

Although millions of tests have been ordered, health officials have been cautious about rushing to buy unproven products.

England’s chief medical officer, Professor Chris Whitty, has said repeatedly: “The one thing that is worse than no test is a bad test.”

The majority of tests so far have been carried out in hospitals or in people’s homes, with a small amount of random sampling via GP surgeries.

But some unusual locations have been set up as mass testing sites.

Furniture giant Ikea has set up a drive-through testing centre for frontline NHS staff at its store in Wembley, north-west London.

Other retailers have offered to help set up testing facilities, with Boots setting up another drive-through system at its headquarters in Nottingham and more sites are being sourced around the country.

Currently, these facilities are reserved for NHS staff and by invitation only. Members of the public are also asked not to attend Boots shops asking for a test, as no testing will be carried out in-store.

Tests have also been carried out in the car park of Surrey theme park Chessington World of Adventures.

It is not yet known when members of the public will have ready access to testing, but it is hoped that the proposed antibody test can be carried out at home without a medical expert present.

-What is the UK’s target?

The NHS is aiming to get to 25,000 of these tests per day, with the ultimate aim being several hundred thousand, but health officials say this target will not be met until the end of April.

But Mr Gove said a “critical constraint” on the ability to rapidly increase testing capacity in the UK is the availability of chemical reagents.

He said Prime Minister Boris Johnson and Health Secretary Matt Hancock were working with companies worldwide to ensure the UK gets the material needed to increase tests “of all kinds”.