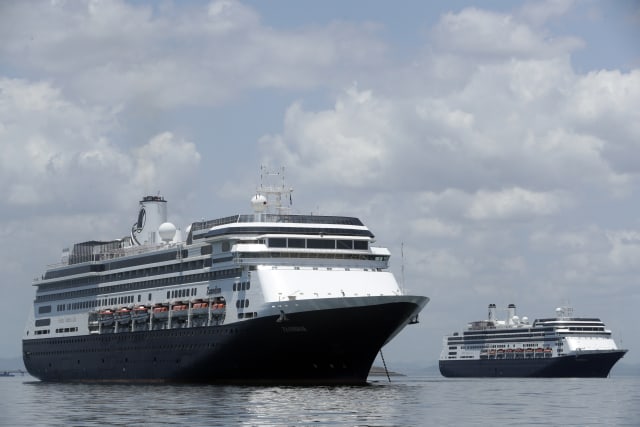 A British national is among four people to have died on a coronavirus-stricken cruise ship embroiled in a bitter dispute over plans to disembark passengers in the US.

In what is being described as an unfolding humanitarian crisis, so far two of the four people to have died on the cruise ship Zaandam have been confirmed to have had Covid-19, with nine people aboard testing positive and 189 reporting flu-like symptoms.

“One of the deceased passengers is from the UK,” a spokesman for the Holland America cruise line, which operates the Zaandam, said in an email to the PA news agency.

“Due to US … laws, we cannot provide any additional medical and health details.”

The Zaandam, which is carrying more than 200 British nationals, and its sister ship the Rotterdam, passed through the Panama Canal on Monday after being denied entry to several ports. Both ships are seeking to dock in Florida later this week.

But the state’s governor is reluctant to allow disembarkation for the more than 1,000 people aboard the Zaandam.

Governor Ron DeSantis told a news conference on Tuesday that Florida’s health care resources were already stretched too thin by the coronavirus outbreak to take on the Zaandam’s caseload.

The US Coast Guard has said if local authorities cannot agree on a docking plan, the matter will go to the the federal government for decision.

Mr DeSantis said he had been in contact with the White House about ferrying medical supplies to the ships.

“Just to drop people off at the place where we’re having the highest number of cases right now just doesn’t make a whole lot of sense,” Mr DeSantis told a news conference.

US President Donald Trump responded by saying he would speak to DeSantis about the ships.

“They’re dying on the ship,” Mr Trump said. “I’m going to do what’s right. Not only for us, but for humanity.”

Covid-19 has been confirmed as causing two of the four deaths on the ship.

Nine people on the ship had tested positive to the coronavirus, Holland America said.

Company president Orlando Ashford wrote an opinion column in the South Florida Sun Sentinel newspaper to plead with officials and residents to let the passengers disembark.

“The COVID-19 situation is one of the most urgent tests of our common humanity,” he wrote. “To slam the door in the face of these people betrays our deepest human values.”

Broward County Sheriff Gregory Tony called the situation a “humanitarian crisis” and asked country commissioners at a Tuesday meeting to avoid decisions based on emotion.

“This ship has been turned away from several countries already,” Mr Tony said. “We are in some very, very critical circumstances where we as a county are going to have to determine are we willing to take on this responsibility.”

However, Broward County Commissioner Nan Rich said: “These people have been turned away from so many countries, one after the other. We are their last hope. What are we going to do? Let this ship go back out to sea and float around and let people die? I don’t think so.”

William Burke, chief maritime officer for Carnival, which owns Holland America, told commissioners “we are coming to the place of last resort,” and that his staff had worked through the night on a docking plan.

Noting four people had already died, he said he hoped two others who were severely ill “will survive the transit”.

The Zaandam originally departed from Buenos Aires on March 7 — a day before the US State Department advised to avoid cruise travel and before any substantial restrictions were in place in Florida.

The ship had been scheduled to stop in San Antonio, Chile, then complete another 20-day cruise to arrive in Fort Lauderdale, Florida, on April 7.

But since March 15, the Zaandam has assumed pariah-like status, having been denied entry at a succession of ports.

Zaandam passengers said they were asked to keep their rooms dark and leave their drapes closed as they passed through the Panama Canal.

Holland America said after being denied entry to a number of ports, the Zaandam was forced to rendezvous with its sister ship the Rotterdam took on nearly 1,400 people who appeared healthy. This left 450 guests and 602 crew members on the Zaandam.

Guy Jones, whose parents Nick and Celia are among some 229 British nationals on the luxury cruise liner, said the cruise company had at least been keeping passengers informed.

He said while his parents, who are from Bristol, have an attitude of “keep calm and carry on”, they are still concerned about what the next step will be.