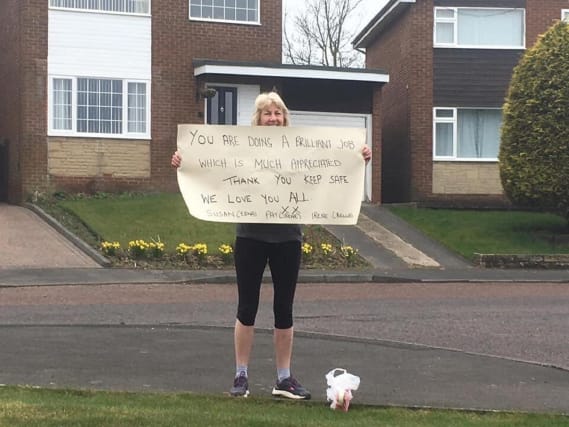 A woman used her daily exercise to show her appreciation for the members of staff who cared for her mother for over 16 years.

Susan Emmett wanted to thank the staff at Lindisfarne Crawcrook Care Home, where her mother was placed when she was 83 and remained until she died earlier this year at the age of 99.

So she used her daily exercise to run to the home and stand outside holding a sign which read: “You are doing a brilliant job which is very much appreciated. Thank you, keep safe, we love you all.”

Ms Emmett’s mother was placed in the care home when she was 83 and remained there until she died earlier this year at the age of 99.

Ms Emmett told the PA news agency: “The carers were always so very good and kind, and hardworking.

“They aren’t paid very much, just basic pay, and I was always staggered by how hard their jobs were.

“I was there very frequently, a few times every week, and we became friends and like an extended family.

“I’ve often thought that I would love to get wider publicity for them because they seem to be unsung heroes.

“It’s such really hard work which no one realises unless you are going into these places, how physical it is, how mentally difficult it is.”

Ms Emmett said she was inspired by last week’s clap in support of NHS staff working during the coronavirus outbreak.

She added: “I just thought if they didn’t hear any clapping, they aren’t going to be getting the appreciation so I made the poster and went along, at distance, with another relative who still has a mother at the home and knocked at the window and clapped at the staff and stuck the poster on the window.

“It is still there so that they have this message when they are feeling a bit down, to let them know that they are appreciated.

“They really appreciate being appreciated. Just somebody telling them that they appreciate what they do and thanking them. It will definitely give them a boost. These people are just so caring.”

She also feels that the care home find it difficult during ‘normal times’ and struggle even more during the Covid-19 pandemic.

“I think they’re struggling,” Ms Emmett added. “They had a nurse who went home to South Africa on holiday and is now stuck there. They are always tight for staff and I think they have one or two members of staff off sick.

“There are always issues, it is hard enough in normal times so it must be so, so difficult now.

“And it is such an important job, people are putting their loved ones into their hands and now you can’t even visit your loved ones so it is completely left to those people and how kind and caring they are.”