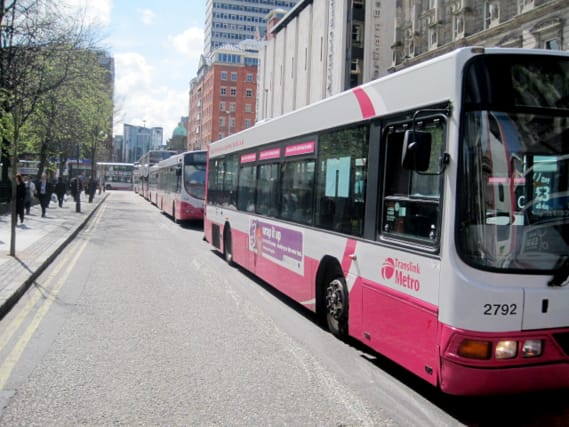 Three Translink workers have been targeted by people coughing or spitting at them after claiming they have Covid-19 in Belfast.

The most recent incident saw a bus driver spat at by a passenger in the Ormeau Road area of south Belfast.

Previously a railway worker was targeted at Great Victoria Street station and a Glider staff member targeted in west Belfast.

A number of police officers in Northern Ireland have also been subjected to similar attacks in recent weeks.

The bus driver spoke out about his ordeal to the BBC on Monday morning.

He described being on the last bus out of the city centre with just one passenger.

“As he was getting off he spat and coughed in my direction shouting ‘virus, I have the virus and now you have the virus, you better wear a mask’,” he said.

“We have a glass screen but there is air vents in it and some of his saliva and spit came through.

“It went onto my arm. We wear short-sleeved shirts, so it came on to my arm.

“He hit the button to stop, he came up to the glass. When you breathe on glass there is condensation and spit.

“That’s what was running down the glass. There were three or four coughs and then he spat.

“That is when he shouted about the virus.

The driver, who gave his name as Michael, said that he had been worried about attending work because he has had kidney problems over the last few days but as an essential worker felt obliged to go to work.

The PSNI are investigating the incident as a serious assault and are set to examine CCTV images from Translink as part of the investigation.

“We can confirm that a bus driver was subject to anti-social abuse from a passenger on Saturday night, 28th March on the Ormeau Road in Belfast,” they said.

“We condemn this incident and all anti-social behaviour in the strongest possible terms.

“These are very challenging times; our staff are working extremely hard to ensure we continue to deliver vital public transport services for key workers and those needing access to key services such as healthcare and food supplies.

“While this would not be acceptable behaviour at any time, the current Covid-19 outbreak means that there is a greater need than ever before to prevent this type of behaviour, which could pose a major health risk.”