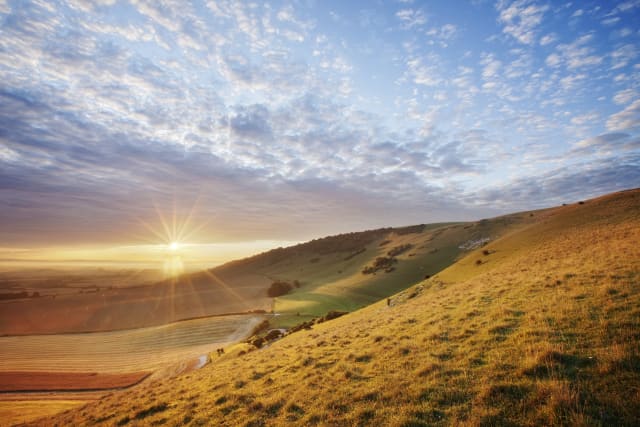 The South Downs National Park is celebrating its 10th anniversary by renewing its commitment to protecting the biodiversity of the beauty spot as the challenges caused by climate change intensify.

Despite being effectively closed to the wider public because of Covid-19, the guardians of the national park, which covers 1,600km2 of land in Hampshire and Sussex, are continuing their work to protect the area’s wildlife and heritage.

Andrew Lee, director of countryside and policy management, said: “The national park has some of the rarest animals and plants in Britain and, without our collective efforts to give nature the space and protection to flourish, these natural works of art could be lost forever.

“Biodiversity loss is global and unprecedented, with climate change only heightening the need for action.

“We’re working really hard to turn the tide on biodiversity loss on a big and small scale, through larger landscape projects and via smaller initiatives for individual species such as the field cricket.”

During its first 10 years, achievements by the park authority, which was established on March 31, 2010, have included restoring 12 species of British amphibian and reptile species and heathland the size of 1,200 football pitches is being improved.

Work has been carried out to restore ecosystems including 35 sites along the River Meon in Hampshire for water voles along with 67% of woodland in the park now under active management.

Chalk grassland is also being protected which has allowed the Duke of Burgundy butterfly to recover from the brink of extinction and the water-biter bush cricket has been successfully reintroduced.

Mr Lee said: “As a planning authority, we will be required to produce a Nature Recovery Strategy, but we want to go further than this and engage partners in a wider nature recovery campaign.”

The park, which incorporates the 160km-long South Downs Way, is supported with 91,000 different volunteering days a year and in 2016 it became one of only 16 worldwide International Dark Sky Reserves.

The park authority has also developed a Local Plan and is working with local farmers and businesses to help balance the needs of the nature within the park and those who live and work in it.

Margaret Paren, chairwoman of the South Downs National Park Authority, said: “As we look forward to the next 10 years, there are big challenges ahead, particularly from the pressure of global climate change and threats to biodiversity.

“But I am optimistic that the passion people have for this varied and dynamic landscape will remain our strongest asset and their commitment will ensure that the South Downs National Park will remain an important place for people and nature in this crowded corner of England.”

But as the park is dealing with the Covid-19 crisis, the park authority is calling for the public to follow Government guidance not to travel to the park for exercise during the lockdown and for the park’s 117,000 residents to stay local.