Q&A: What’s next for Harry and Meghan? 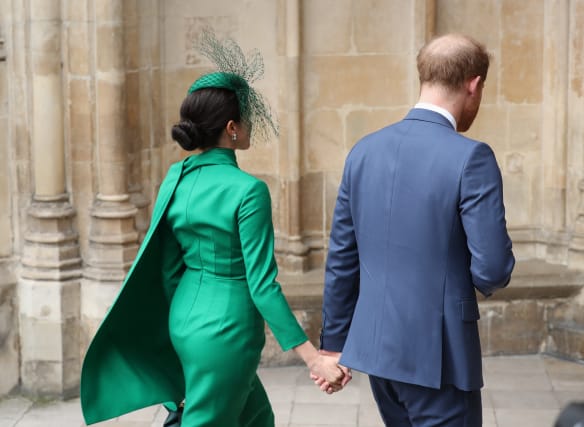 The Duke and Duchess of Sussex sparked a major royal crisis by announcing they wanted to quit as senior royals.

Here is a look at the ins and outs of the Megxit troubles and what will happen next.

It is “Megxit Day”, so as March 31 begins, Harry and Meghan cease to be senior royals as they walk away from the monarchy. They will stop using their HRH styles.

No documents will be signed or laws passed and the decision will not be binding, but it marks a new phase in their life.

– What have Harry and Meghan said?

The couple posted a farewell message on their Sussex Royal Instagram account on Monday, thanking fans for their support and saying they were going offline for now.

“We look forward to reconnecting with you soon. You’ve been great! Until then, please take good care of yourselves, and of one another,” they added, before signing off as “Harry and Meghan” rather than their official titles.

– When will we hear from them next?

Who knows? They are in the US and will spend the next few months focusing on their baby son Archie Mountbatten-Windsor, and privately supporting their existing charities and developing their future non-profit venture.

Amid the coronavirus pandemic, they said they are “focusing this new chapter to understand how we can best contribute”.

– Will they continue to use their Sussex Royal account?

No. They will now no longer use their Instragram account or update their sussexroyal.com website. The account and site will remain online for now, but will be inactive.

– Can they still use Sussex Royal as their brand?

No. The Queen and her senior officials have declared they must drop the use of the word “Royal”.

– Are Harry and Meghan happy about this?

They didn’t appear to be. Their website states they will not use “Royal” but argues that the monarchy has no jurisdiction over the use of the word overseas.

– What will their new brand name be?

The couple have delayed announcing a new Instagram handle and brand, with a spokeswoman saying they wanted the focus to remain on the global response to the coronavirus pandemic.

– What about their new non-profit venture?

Again no details at present as the world battles the Covid-19 illness.

But the Travalyst sustainable tourism project which Harry co-founded will become an independent non-profit organisation in the UK.

– Do they have a new Team Sussex?

Yes. They have appointed a new chief of staff – Catherine St Laurent – who used to work for the Bill & Melinda Gates Foundation.

She starts next month and will be executive director of their unnamed organisation.

US agency Sunshine Sachs will take over the Sussexes’ media for now, along with former Sussex Royal Foundation press officer James Holt in the UK.

– Will they carry out any more royal duties?

No. The couple are quitting, not just as senior royals, but as working royals in general.

– Was this what they wanted?

Not quite. Harry and Meghan wanted to step down as senior royals but have a dual role, supporting the Queen and earning their own money.

– But this was unworkable?

Yes. They effectively could not have their cake and eat it.

It was too controversial given their global profiles and would have led to accusations they were cashing in on their royal status.

– How did the Queen sort out the saga?

The monarch held a crisis summit at Sandringham with Harry, the Prince of Wales and the Duke of Cambridge – and it was announced a few days later there would be no dual role for the Sussexes.

– Why did Harry and Meghan’s plans cause such shockwaves?

Harry and Meghan issued a bombshell statement on January 8, without warning the Queen and the Prince of Wales and after being told by the monarch to discuss matters with Charles first.

– Why did they want to step down as senior royals?

The couple spoke of their struggles dealing with royal life and the intense tabloid interest, in a television documentary about their Africa tour.

– What were the low points following their wedding?

Controversies included rows over privacy and use of private jets, a falling out between Harry and William, the launch of legal action and an attack on the press which overshadowed an official royal tour.

– Where will they live?

Harry and Meghan, with their son Archie, were renting on Vancouver Island in Canada, but have now moved to the US, setting up home in Los Angeles, where Meghan’s mother Doria Ragland lives.

– What about Frogmore Cottage?

Harry and Meghan will keep their Windsor home, start paying commercial rent, and pay back £2.4 million in taxpayers’ money spent on its renovations.

It is not known if they have done so yet.

– What will they be called?

They will be the Duke and Duchess of Sussex – but without their HRHs.

Judging from their final post, they are likely to just call themselves Harry and Meghan.

– Who had a similar title?

Wallis Simpson – the last American divorcee to marry a senior royal, for whom Edward VIII abdicated the throne.

Mrs Simpson became the Duchess of Windsor, but was never permitted to be an HRH.

– Have they been stripped of their HRHs like Diana?

No. Harry was born a prince and remains so. They will retain their HRHs but will not use them.

They are predicted to make millions from public speaking, lucrative contracts, book deals – or perhaps, for Meghan, a return to acting.

– What have they done already?

Meghan has narrated a Disneynature film about a family of elephants and their journey across Africa – which will air on April 3 – nine months after Harry, while on an official engagement, told a Disney boss his wife was available for voiceover work.

A donation was made to a conservation charity, but it is not known if Meghan received a separate fee.

Sources say she has no further deals with Disney.

Harry, accompanied by Meghan, gave a speech in February at a JP Morgan event in Miami and talked about the therapy he had over the death of his mother.

Not completely. The Prince of Wales will also continue to offer private financial support.

US President Donald Trump has insisted America will not foot the bill.

A spokeswoman for the Sussexes said privately funded security arrangements have been made and the couple will not ask the US government for help.

– Why is this still causing controversy?

It remains unclear whether the private security arrangements are in addition to, or instead of, the couple’s Metropolitan Police protection officers, and whether any police being used will continue to be paid for by UK taxpayers.

It is also unclear who is paying for the private arrangements – whether it is the Sussexes, the Queen or Charles.

Neither Buckingham Palace nor the Home Office will confirm details, but the total security bill is estimated to be as much as £20 million a year.

– What about their patronages?

But Harry’s military appointments will be put on hold for the next 12 months.

– What about their Commonwealth roles?

Harry is quitting his role as Commonwealth Youth Ambassador.

But he will remain president of the Queen’s Commonwealth Trust, and Meghan will still be the trust’s vice-president.

As Archie will be spending most of his time in North America, it it is likely he will not have a British education, but nothing has been confirmed.

At the time of their engagement, it was announced that Meghan would be applying for British citizenship.

– Will they been seen again in the UK?

Unlikely for a while with the UK in lockdown.

Harry was due at the London Marathon in April in a non-royal capacity, but the race has been postponed until October, and the Trooping the Colour celebrations of the Queen’s official birthday in June, when Harry and Meghan could have joined the royals, will not happen in its traditional form.

– Is this end of Harry and Meghan’s royal roles forever?

Possibly not. The situation will be reviewed by the monarchy in 12 months, leaving the door open in case of a change of heart.

The Queen has told Harry the couple are much loved by the royals and would be welcomed back if they wanted to be working royals in the future.

– Is Harry still in the line of succession?

Yes, he remains sixth in line and Archie is seventh in line.