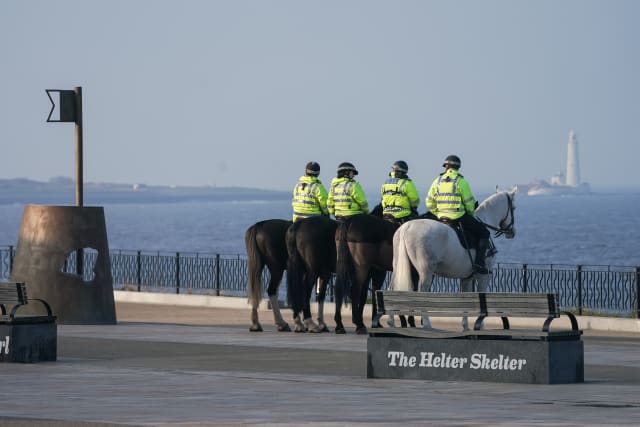 Police have been criticised over their handling of new powers to enforce the Covid-19 lockdown.

Lancashire Police issued 123 fines for breaches of the rules over the weekend, while officers in Cheshire summonsed six people for various offences, including multiple people from the same house going out to buy “non-essential” items.

South Wales Police hit out at MP Stephen Kinnock for visiting his father, former Labour leader Neil Kinnock, on his birthday; while Derbyshire dyed the Blue Lagoon in Buxton black to deter groups of people from gathering at the beauty spot.

Former independent reviewer of terrorism legislation Lord Anderson told the PA news agency: “Police in their words and actions need to be clear about the difference between rules and guidance, both to maintain public confidence in their role and to discourage snoopers, snitches and vigilantes.

“Serious breaches should attract fines, but news reports of over-enforcement by police and public are deterring the timid from exercising even the limited freedoms they have.”

The move by Cheshire to curtail “multiple people from the same household going to the shops for non-essential items” appears to be a misinterpretation of the law.

The lawyer who tweets as The Secret Barrister said: “There is nothing in the legislation that prohibits multiple people from the same household going to the shops. Nor is there a bar on going out to buy ‘non-essential items’.

“Such things may not be desirable, but they are not crimes. This does the police no credit.”

Jules Carey from Bindmans said the police need to make a “cultural shift” in using the new powers to protect public health rather than prevent disorder.

“The credibility of officers and forces will quickly be called into question if they fail to understand what is required of them.

“What is required of them is the necessary and proportionate enforcement of the restrictions put in place to protect society; what they must avoid is overlaying the current health crisis with an atmosphere of tyranny and a sense of dystopia by setting up roadblocks, flying drones and overzealous policing on the ground.”

Britain’s most senior police officer, Dame Cressida Dick, has told her force only to use the new powers, which allow them to fine or arrest those who break lockdown laws, as a last resort.

She told LBC: “We are all getting used to the new restrictions and I’ve been very clear that in the first instance I want my officers to be engaging with people, talking to people, encouraging them to comply.

“Explaining, of course, if they don’t understand – already we have had examples of people who simply hadn’t quite heard all the messages – and, only as a very last resort with the current restrictions, using firm direction or even enforcement.”

Guidance has been issued to the 43 police forces in England and Wales by the National Police Chiefs’ Council, but it has not yet been made public.

Gracie Bradley from the human rights charity Liberty said the goodwill of the public would be “undermined by harsh and heavy handed policing”.

She said: “Despite the broad scope of these powers, we’ve seen various incidents of police going even further – and beyond their lawful remit.

“This makes it impossible for people to know how to comply with these new rules, and challenge police when they overreach.”

Before the full lockdown, the force shared pictures on social media of queues of cars visiting the Peak District.

Lord Sumption told Radio Four’s World At One: “In some parts of the country the police have been trying to stop people from doing things like travelling to take exercise in the open country which are not contrary to the regulations simply because ministers have said that they would prefer us not to.

“The police have no power to enforce ministers’ preferences but only legal regulations which don’t go anything like as far as the Government’s guidance.

“I have to say that the behaviour of Derbyshire Police in trying to shame people in using their undoubted right to travel to take exercise in the country and wrecking beauty spots in the fells so people don’t want to go there is frankly disgraceful.”

He added: “Derbyshire Police have shamed our policing traditions.”