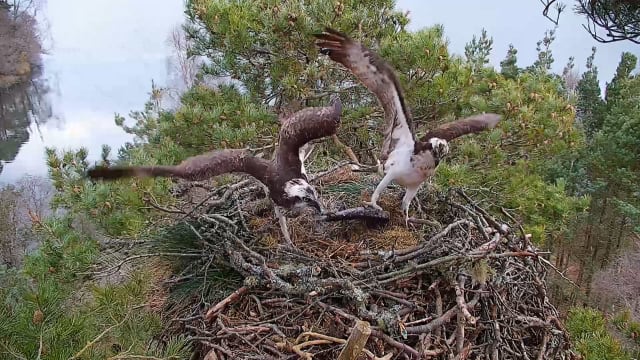 A new female osprey has been spotted visiting a nest at a wildlife reserve in Perthshire.

The ringed female, identified as NC0 originally from Loch Ness, made a fleeting appearance on Saturday at the Scottish Wildlife Trust’s Loch of the Lowes Wildlife Reserve.

She then spent more time at the nest on Sunday and Monday along with LM12 – a male who in that time made several attempts to breed with her.

Sara Rasmussen, the trust’s ranger in Perthshire, said: “LM12 and NC0 are still fairly unsure of each other.

“He has shown some defensive signs but there have also been attempts at mating.

“Birds can take time to build a relationship and so far they aren’t sharing fish in the same way that established pairs do.

“There is still some chance that LF15 will return this week.

“If she does it will be very exciting to see what plays out and whether she is able to reclaim her nest from NC0.”

Ospreys returned to the UK around the 1960s and there are now an estimated 300 pairs breeding each summer.

While the pair were settling together on Sunday afternoon, another osprey – thought to be a male – dived towards the nest at speed.

Despite initial fears, Ms Rasmussen said: “This is a fantastic reminder that there are lots more ospreys around and they are jostling to find nests where they can breed.

“At some points in previous years we’ve seen upwards of half a dozen birds over the nest at Lowes in a single day.”