Harry and Meghan are ‘celebrities’ who should pay own way, ex-minister says 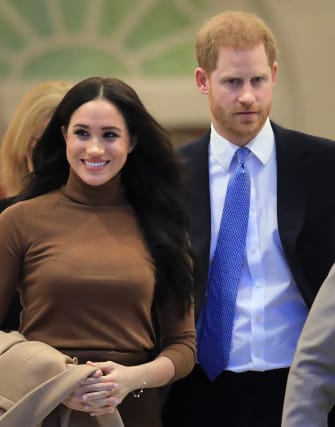 The Duke and Duchess of Sussex are now celebrities not members of the monarchy who should fund their own personal security, a former Government minister has said.

Harry and Meghan were forced to disclose they had put in place “privately funded security arrangements” for their move to the US after President Donald Trump said his country would not pay for their protection.

The couple will officially walk away from the royal family at the end of the day, starting a new life in Los Angeles, with their impending exit from The Firm dubbed Megxit.

“They’re not carrying out any royal duties so there’s no reason at all why the British taxpayer should support them in security.

“If they want to live in Hollywood, or wherever it is, that’s up to them but they should bear the costs of security themselves.

“You wouldn’t expect the British taxpayer to pay for Posh and Becks or Elton John and David Furnish so why should they pay for Harry and Meghan.”

The duke and duchess’ desire to earn money while remaining members of the monarchy was unworkable and so they chose to leave and become financially independent.

But it is not known where the private funds to pay for their security will come from, whether their own money, financial support from the Prince of Wales or another source.

Mr Baker, who has written the book And What Do You Do? about the monarchy, added: “They talked about private security but what they haven’t said is who is paying for it, I think we still need to have the answer to that question.”

From Tuesday, the monarch’s grandson and his wife will no longer use their HRH styles as they pursue their new life of personal and financial freedom in America.

But the couple are leaving the monarchy just as the country braces itself for the worst of the coronavirus pandemic, expected in the coming weeks, and after Charles completed his seven day self-isolation after contracting the virus.

Royal author Penny Junor said Harry and Meghan were now “pretty irrelevant” as the royal family attempted to lead the nation through the health crisis.

She said: “It’s a great morale boost to have words from the Queen or words from William and to watch his children clapping the NHS workers. It’s important.”

Ms Junor went on to say: “All of this is absolutely what the family is about and those members of the royal family that are on a limb now are pretty irrelevant.”

A spokeswoman for the Sussexes took the unusual step of commenting about their protection plans after Mr Trump said in a tweet on Sunday: “Now they have left Canada for the U.S. however, the U.S. will not pay for their security protection. They must pay!”

In response the spokeswoman said: “The Duke and Duchess of Sussex have no plans to ask the US government for security resources.

“Privately-funded security arrangements have been made.”

Harry and Meghan have moved from their exclusive Vancouver Island home to Los Angeles, where Meghan was born and grew up and her mother Doria Ragland still lives.

They are now said to be living in lockdown close to Hollywood in accordance with the sunshine state’s Covid-19 containment measures.

The Royal Canadian Mounted Police previously confirmed it will stop providing protection for the Sussexes once they ceased to be senior royals.

The duke and duchess have already forged ahead with plans to create their new public roles.

It is said they want to make a change in the “armed forces arena” and will make the military central to their charitable work.

Reports have claimed issues such as medical care and homelessness for veterans and injured service personnel, both in the UK and the United States, are to be a focus of their new charitable organisation likely to be launched in the coming weeks.

The couple are also expected to announce a new name for their Sussexroyal brand in the next few days after they conceded in February the word royal could not be used following their decision to leave the monarchy.

Their popular Instagram account uses the name Sussexroyal, as does a website set up by the couple after their decision to to stop carrying out official royal duties in favour of financial freedom.

Meghan has already begun her life in the commercial world, narrating a new Disney film about a family of elephants and their journey across Africa available to stream from April 3.

She will not receive a payment, Disney will make a donation to the wildlife organisation Elephants Without Borders supported by Harry, but it will be a calling card to other global entertainment companies.

The couple faced criticism after video footage emerged of Harry at the premiere of The Lion King in London last July, praising Meghan’s ability to do voiceover work to the then head of Disney Bob Iger.

Meghan will bow out of royal life from Tuesday just one year, 10 months and 12 days, or 682 days, after marrying into the family.

Harry and Meghan plunged the royal family into a period of crisis when they announced in January they wanted to step back as senior royals and become financially independent.

It was later announced they would give up royal duties, split their time between North America and the UK, with the majority spent overseas, no longer be known as HRH, and their lives as working royals would end on March 31.