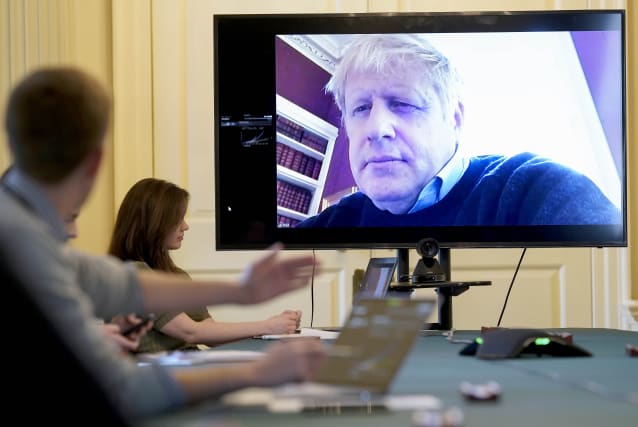 Boris Johnson will chair a meeting of his Cabinet by videolink as he continues to self-isolate in Downing Street after testing positive for coronavirus, amid growing pressure to get more protective equipment to health workers.

The Prime Minister has faced heavy criticism over shortages of personal protective equipment (PPE) for frontline NHS staff as well as the slow rollout of testing – issues which are likely to be discussed by ministers on Tuesday morning.

The PM and Mr Hancock have since tested positive for Covid-19, while Prof Whitty is self-isolating after developing symptoms. In Tuesday’s meeting, all attendees are expected to join by videolink.

It comes as 1,408 people are confirmed to have died in UK hospitals after testing positive for Covid-19, as of 5pm on Sunday.

Education Secretary Gavin Williamson said Mr Johnson’s workload was undiminished despite him having to self-isolate after becoming infected.

“The energy and the amount of work that is coming out of No 10 and the flat that he is isolated in has not tapered away,” he told the PA news agency.

“I think self-isolation has increased the prime ministerial workrate. He is absolutely all over it.

“This is the beauty of modern technology – even when the Prime Minister is not able to be necessarily in the room he is still doing an amazing job in terms of doing the work.

“That is the same with the Health Secretary and, I have no doubt, the chief medical officer in terms of harnessing technology and making sure that they do everything that is needed in order to tackle this quite extraordinary and unique situation.”

“We all recognise that London and particularly central London has been a real hotspot for the virus,” he said.

The Office for National Statistics is set to release figures on deaths involving coronavirus in the wider community, such as care homes.

The ONS will look at deaths where Covid-19 was mentioned anywhere on the death certificate, including in combination with other health conditions.

These figures are likely to offer detail on how many community deaths involve coronavirus, rather than just looking at deaths in hospital.

It comes after Sir Simon Stevens, chief executive of NHS England, revealed there had been almost a 50% rise in a few days in the number of people being treated for coronavirus in England’s hospitals.

He said on Friday that more than 6,200 patients were in hospital with Covid-19, but on Monday this figure had jumped to more than 9,000.

England’s chief scientific adviser Sir Patrick Vallance said the NHS was seeing around an additional 1,000 patients a day and described this daily rise as “stable”.

He told reporters at the daily press briefing: “I do expect that number to continue. I expect people coming every day to be about that, it may go up a little bit.

“And in two or three weeks you would expect that to stabilise and to start to go down a bit.”

Sir Patrick also said social distancing measures are “making a difference” and transmission of coronavirus in the community is thought to be decreasing.