How the Megxit crisis unfolded 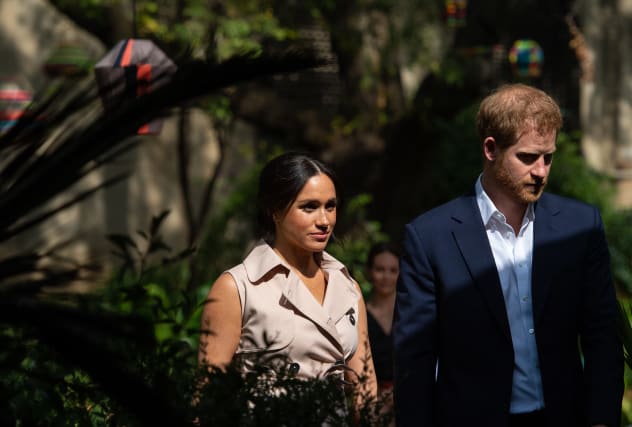 The Duke and Duchess of Sussex’s exit from the monarchy as senior royals begins on March 31.

Here is a timeline of the Megxit saga:

– January 7 2020: Harry and Meghan return to the UK and visit Canada House in London to thank the country’s high commissioner for the hospitality they received during their six-week stay in Canada over the festive period.

– January 8: An exclusive by The Sun newspaper reveals Harry and Meghan plan to move to Canada for a time and are reviewing their royal roles.

The duke and duchess announce they intend to step back as “senior” members of the royal family, become financially independent, still support the Queen but split their time between the UK and North America.

The Queen is left hurt after the couple did not consult her about their statement.

Buckingham Palace warns there are “complicated issues that will take time to work through”.

Meghan returns to Canada where she has left Archie and their dogs had already been moved.

– January 9: It emerges Harry and Meghan ignored instructions from the Queen not to make any announcement and the duke had been told his grandmother would not discuss his proposals before he had talked them through with his father.

The Queen directs all four royal households to find “workable solutions” for the Sussexes within “days not weeks”, working with governments at home and abroad.

– January 11: The Queen calls a meeting with Harry, the Prince of Wales and the Duke of Cambridge at Sandringham to discuss the crisis in two days’ time.

Video footage emerges of Harry highlighting his wife’s interest in doing voiceover work to a Disney boss while on an official engagement at the Lion King premiere.

– January 13: Harry faces his grandmother, father and brother at the crisis summit at Sandringham.

The Queen issues a statement sanctioning Harry and Meghan’s wishes but expressing her regret at their decision.

She calls the couple Harry and Meghan rather than the duke and duchess and says there will be a period of transition as they spend time in Canada and the UK.

The Queen says she has asked for final decisions on the complex matters to be made in the coming days.

– January 14: It is confirmed Meghan, who was planning to take part in the talks via conference call, did not dial in as it was decided it “wasn’t necessary”.

– January 15: Court documents from the duchess’ lawsuit against Associated Newspapers accuse Meghan of being more worried about the unflattering effect of the story about the letter she wrote to her father Thomas Markle than a breach of her data protection rights.

Meghan visits a women’s centre in Vancouver, and then Justice for Girls, a charity helping girls in poverty.

– January 16: Harry makes his first official appearance since announcing he is quitting as a senior royal, at Buckingham Palace for the Rugby League World Cup 2021 draw.

Smiling but ignoring a question from a reporter about his future, he tells children playing rugby on the palace lawn: “Look after the grass though, yeah? Otherwise I’ll get in trouble.”

– January 17: Staff at Frogmore Cottage, Harry and Meghan’s home in Windsor Great Park, are to be deployed elsewhere while they are in Canada.

– January 18: The summit decisions are revealed – a hard Megxit: The dual role they wanted as working royals is deemed unworkable.

Buckingham Palace issues a statement saying from spring 2020, Harry and Meghan will no longer be carrying out royal duties and they will not use their HRH styles.

Harry will lose his military appointments and they will spend the majority of their time in North America and repay the taxpayers’ millions spent on their Berkshire home. The deal will be reviewed in 12 months.

The Queen says Harry, Meghan and Archie will always be much-loved members of her family and she recognises the challenges they have experienced as a result of intense scrutiny.

– January 19: Harry makes an emotional speech at a Sentebale dinner, telling of his “great sadness” but saying there was “no other option”.

– January 21: Harry arrives back in Canada to be reunited with Meghan and Archie.

The couple issue a legal warning over the publication of paparazzi shots of Meghan walking her dogs on Vancouver Island with Archie in a sling.

– January 27:  Thomas Markle says he is willing to testify against his daughter as part of her legal action against Associated Newspapers.

– February 4: More than three-quarters of Canadians think their country should not foot the Sussexes’ security bill, a survey for the CTV network reveals.

– February 6: Harry, accompanied by Meghan, gives a speech at a JP Morgan event in Miami, Florida, and talks about the years of therapy he has had over the death of his mother.

Reports suggest Harry could have received a fee worth hundreds
of thousands of pounds.

– February 14 : It emerges Harry and Meghan are closing their Buckingham Palace office, with up to 15 job losses.

Meghan releases a video of herself chatting to Vogue editor-in-chief Edward Enninful and putting on party hats in celebration of her guest editing of the magazine last year.

February 19: The Daily Mail reports Harry and Meghan have been banned from using the Sussex Royal brand.

The Palace issues an update with further details, saying the date of Megxit will be March 31.

Harry’s military appointments will be put on hold.

But Harry and Meghan add their own statement to their website, leading commentators to accuse them of taking a swipe at the Queen and other royals.

The couple claim the monarchy has no ‘jurisdiction’ over the word Royal overseas, that they are being treated differently from other working royals and they will “continue to require effective security to protect them and their son”.

– February 25: The duke tells a tourism conference host in Edinburgh “just call me Harry” as he returns to the UK for his final round of official royal engagements.

– February 27: The Royal Canadian Mounted Police confirms it will stop providing security for the Sussexes once they cease to be senior
royals.

– February 28: Harry recreates The Beatles’ Abbey Road album cover with Jon Bon Jovi as he joins the rock star for the recording of a charity single.

– March 3: The Sun reports the Queen has told Harry that he and Meghan would be welcomed back as senior royals if they changed their mind, during a four-hour chat at Windsor Castle.

– March 5: Meghan carries out her first public royal duty since the Megxit crisis by attending the Endeavour Fund Awards with Harry.

The duke tells how he was “proud to serve Queen and country”.

– March 6: Images of Meghan’s secret private trip to the National Theatre are released on the couple’s Instagram account – on the same day the Duchess of Cornwall is delivering a key speech on domestic violence.

– March 7: Harry, in his last official duty as Captain General of the Royal Marines, and Meghan are given a standing ovation at Mountbatten Music Festival at the Royal Albert Hall.

– March 8: The duchess marks International Women’s Day, having earlier visited a school in Dagenham, east London, where she told schoolboys to protect the women in their lives and urged pupils to “stand for what is right”.

– March 8: The Sussexes join the Queen at church in Windsor.

– March 9: Harry and Meghan gather with the Queen, Charles, Camilla, and the Duke and Duchess of Cambridge at the Commonwealth Service at Westminster Abbey – their last official engagement as senior royals.

– March 10: The couple, who at some stage head back to Canada, share photos of themselves meeting with young leaders of the Queen’s Commonwealth Trust at Buckingham Palace.

– March 11: Harry is revealed to have been pranked by phone call hoaxers posing as teenage climate change activist Greta Thunberg, and talks to them about his decision to quit and how US President Donald Trump has “blood on his hands”.

The Sussexes release photos and footage of Meghan meeting Commonwealth scholars at the palace ahead of the Westminster Abbey service.

– March 25: Harry’s father the Prince of Wales tests positive for coronavirus. Charles is said to have spoken to both Harry and William.

– March 26: It emerges Harry, Meghan and Archie have left Canada and set up a permanent home in Los Angeles, California.

Disney announces Meghan has narrated a film about a family of elephants and their journey across Africa, which will stream on Disney+ from April 3.

– March 31: Harry and Meghan officially step down as senior royals and stop using their HRH styles.