Coronavirus rulebreakers across the country stopped by police 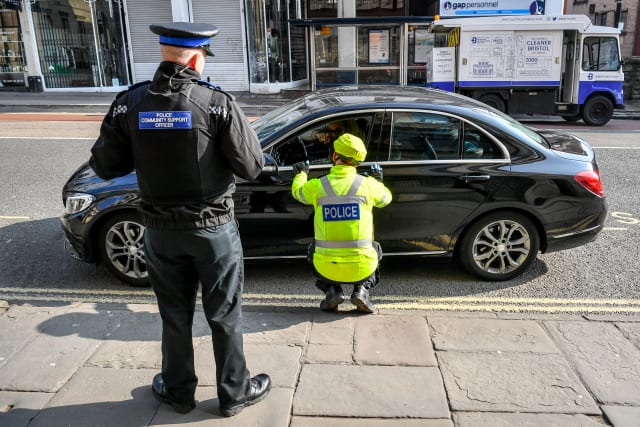 Police have apprehended alleged coronavirus rulebreakers across the country this weekend, the first since the lockdown measures came into force.

Members of the public have been found holding house parties and on cross-country road trips by officers in various parts of the UK and Ireland.

One motorist was stopped on the motorway with his wife in the boot of his car, having made a 224-mile round trip to collect a £15 eBay purchase, despite people only being told to make “essential” journeys.

The driver had travelled from Coventry to Salford to pick up the windows he had bought and was stopped by a motorway patrol on the return part of his journey.

His wife, unable to fit in the car alongside the windows, was found in the boot when they were stopped on the M6 in Cheshire.

A traffic offence report was written, according to the North West Motorway Police.

In Derbyshire, police posted pictures from the 25-person karaoke party they went to break up.

Officers were said to be “in absolute shock” about the gathering in Dover Street, Normanton, at 10pm on Saturday.

Derbyshire Police told the PA news agency that “strong words of advice” were given to all those inside and the party was dispersed but no further action was taken.

Emergency service workers have also been subject to abuse.

In Cork, Ireland, a 19-year-old man has been charged after allegedly spitting in the face of a Garda member and claiming he had coronavirus.

He was due to appear at a special sitting of Anglesea Street District Court on Sunday afternoon.

Three women from the south-west will all be in front of magistrates next month after Avon and Somerset police enforced the new rules on Saturday.

A 26-year-old woman was charged with assaulting an emergency worker after an officer attending reports of a house party in Bridgwater was coughed and spat at just after 7pm on Saturday.

In Bath, a 42-year-old woman was charged with two counts of assaulting an emergency worker – one relating to an officer being spat at – just after 7.30pm on Saturday.

A 36-year-old woman has also been charged with two counts of assaulting an emergency worker after officers were physically assaulted while attending a domestic-related incident in Bridgwater just before 8pm on Saturday.

In neighbouring Gloucestershire, a 43-year-old man has been charged with assaulting an emergency worker and threatening GBH by infecting with Covid-19 after he allegedly deliberately coughed in the face of a paramedic.

In Manchester, a man has been charged after police said he refused to stop approaching queuing shoppers at the Tesco in Stalybridge.

Steven Norman Mackie, 53, is due to appear at Tameside Magistrates’ Court on Monday charged with one count of failing to maintain public health and causing public disorder and nuisance contrary to regulations 6, 9(1b and 4) of the Health Protection Regulations 2020.