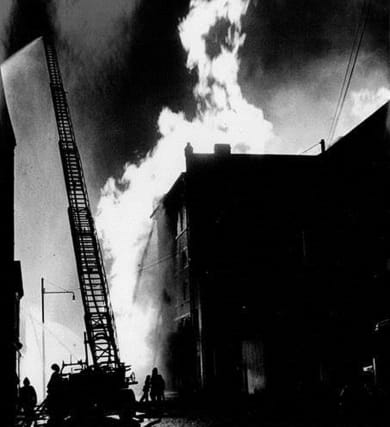 The Fire Service is paying tribute to 19 firefighters and crew who died tackling a warehouse blaze 60 years ago in what was the biggest loss of life to the organisation in peacetime.

Fourteen firefighters and five members of the Salvage Corps died while tackling a blaze at the Arbuckle, Smith and Company whisky bond in Cheapside Street, Glasgow, on the evening of March 28, 1960.

An explosion inside the building caused its 60ft walls to crash down into Cheapside Street and Warroch Street.

The Scottish Fire and Rescue Service (SFRS) said it remains the largest peacetime loss of life ever suffered by Britain’s fire and rescue services.

As the SFRS is unable to hold its annual service of remembrance due to restrictions on public gatherings amid the coronavirus pandemic, Chief Officer Martin Blunden will go to the city’s Necropolis on his own to lay a wreath at the firefighter memorial statue on Saturday.

He said: “Today we remember the 19 men who made the ultimate sacrifice to protect the people of Glasgow from harm.

“The loss at Cheapside Street was catastrophic. It continues to resonate to this day, and the spirit and bravery of these firefighters will never be forgotten.

“It is, of course, unfortunate that we can’t hold the conventional service of remembrance this year.

“However, while we have been unable to gather together today, the memories of those who fell are still uppermost in our minds on this poignant date.

“These men were devoted fathers, husbands, brothers and sons. Their bravery represents a proud part of our history, and our thoughts will always be with their families.”