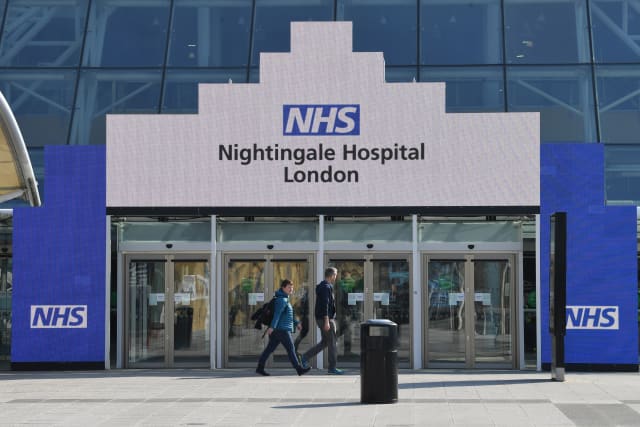 More than 750 St John Ambulance volunteers have offered to help at the new hospital set up to meet demand for intensive care beds as the coronavirus crisis escalates.

Up to 200 first aiders per day will assist at the Nightingale Hospital set up in London’s ExCel centre, which is ordinarily used for exhibitions and trade fairs.

The volunteers will be needed day and night, with 100 on each shift.

The 143-year-old charity has around 8,500 regular volunteers and provides an auxiliary ambulance service – often at large public events.

The volunteers are currently going through selection and being given further training, and could be in the field caring for coronavirus patients as early as next Wednesday, the organisation said.

Many others will also be assisting in other makeshift centres set up in different parts of the country.

Alex Davies, 32, is one of the many St John Ambulance crew who answered the call for volunteers.

Mr Davies, who has 15 years experience with the organisation, has been appointed tactical commander of the St John volunteers at the Nightingale Hospital.

“In English that basically means I’m manager of all the St John people who will be here,” he told the PA news agency.

“Everyone is what you call a first aider, so they’ve done normal first aid training.

“Many of our people are advanced first aiders so they already have skills administering medical gasses and doing various other bits and pieces and using diagnostic equipment, so we are taking people from both those groups.”

He continued: “I think all of us have a feeling of some trepidation because we are going to deal with a situation we haven’t had to deal with before, and also enormous pride that we are going to be a part of the response that is going to make a huge difference for these patients.”

Mr Davies, who lives in Victoria in London, said dealing with death was often part of the job for ambulance crews, but would be harder for some of the other volunteers.

“I have personally dealt with a lot of deaths because I am ambulance crew with St John, so that is just something you accept, but obviously nothing on this scale and not all of our people are ambulance crew,” he said.

When asked about the scale of the Nightingale Hospital, he said: “It is extremely impressive. I was here three days ago when it was nothing.

“Now it really does look like an intensive care unit and they are just making it bigger and bigger and fitting out the final bits and pieces, but it is a really impressive hospital.”

Mr Davies, who is head of production engineering at a financial services company, has been granted indefinite leave to help at the Nightingale Hospital.

“My boss told me to do what’s best for society and my company have just released me for as long as is required to help,” he said.

Richard Lee, the charity’s chief operating officer, said: “The clinical skills, resilience and compassion of St John volunteers really matter in a challenging situation like this and we are grateful for their commitment.

“In the coming weeks and months, St John Ambulance will face extraordinary demands, the likes of which our organisation has not faced in peacetime.

“Our resources will be stretched, and our people will be tested, but we will stop at nothing to help beat this virus.”

St John said it was in the midst of an “unprecedented” training push of more than 1,000 volunteers to ready them for frontline work alongside NHS staff as the pandemic deepens.

Ruth May, the NHS’s chief nursing officer for England, said she was “delighted” at the charity’s offer of help, adding: “We cannot win this battle against the virus alone.”

She also urged any former NHS clinical staff who have not yet done so to respond to the “Your NHS Needs You” recruitment campaign.

“Given the scale of the task ahead we cannot have too many doctors, nurses or other health care staff,” she said.