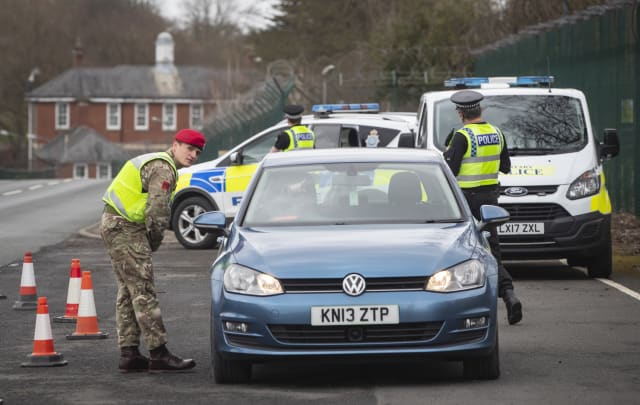 Police have urged motorcyclists to stay out of the countryside and told them they cannot claim it is part of their permitted daily exercise.

The crackdown came as it emerged Derbyshire Police had dyed the water at a local beauty spot black to deter visitors.

The force had already come under fire from some quarters for using drone footage to shame people travelling into the Peak District to walk the hills.

And in North Wales, officers criticised a driver who took their child out for a driving lesson because they wanted to make the most of the quiet roads, saying this was not an essential journey.

On the weekend when the clocks go forward, heralding better weather and lighter nights, police kept up the strict message that the countryside was not open to visitors.

Inspector Mark Gee, manning a vehicle check point in Richmondshire, North Yorkshire, said: “We have had motorcyclists coming into the Dales claiming they are exercising.

“We have to remind people, exercise should be done from your home address, on foot unless you’re on a bike.

“Every time you are on a road there’s an increased chance of a collision and if that happens, it is putting a strain on our local NHS resources which are limited in any case, even without us facing a worldwide crisis.”

He said the quieter traffic could encourage bikers to speed up on open roads, leaving them more at risk of crashing.

Mr Gee said the checkpoint near the Catterick Garrison was being supported with officers from Royal Military Police.

He felt the message was getting through to most people that the countryside was not open, and noted roads were less busy than previous days.

Meanwhile, Derbyshire Police introduced further measures to prevent gatherings in the county by dyeing a “blue lagoon” in Buxton black.

In a Facebook post earlier this week, the Buxton safer neighbourhood policing team said officers had been told people were congregating beside the water in Harpur Hill.

The post said: “No doubt this is due to the picturesque location and the lovely weather (for once) in Buxton.

“However, the location is dangerous and this type of gathering is in contravention of the current instruction of the UK Government.

“With this in mind, we have attended the location this morning and used water dye to make the water look less appealing.”