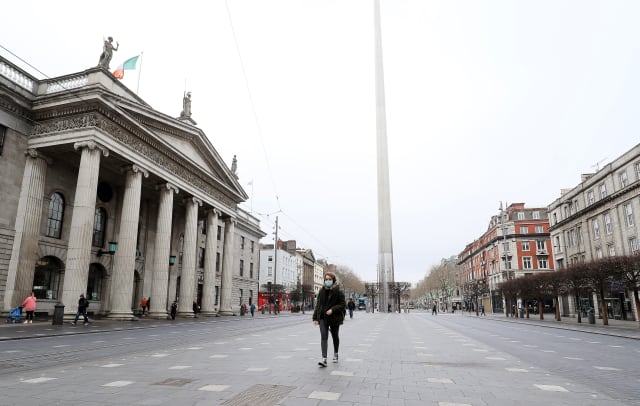 New coronavirus restrictions on public life in Ireland will not be sustainable for a long period, the health minister has said.

Simon Harris expressed hope there could be some relaxation of the measures after an initial two-week period of enforcement, but he warned that life will not be returning to normal in the short term.

The new clampdown on movement in Ireland came into force at midnight on Friday.

The restrictions were ordered by the Government amid fears that critical care hospitals will soon be overwhelmed by cases.

People have been ordered remain in their homes in all but a limited set of specific circumstances until Sunday April 12.

Mr Harris said admissions to intensive care units are expected to rise significantly over the next week with people already infected with Covid-19.

“But we would expect, and our medical advisers would expect, that these measures that we’ve put in place could start to slow down that curve in about 10 days to two weeks, that’s what we’re working towards,” he told RTE Radio One.

“Will we be in a position on the 12th of April where life in Ireland will return to normal? Absolutely not and let’s be honest with each other.

“And these are measures that we’re going to need to continue to work on.

“Do we hope to be in a position in two weeks’ time to say that we’ve made progress and some of the measures can be tweaked, removed, changed? Absolutely.

“The measures that we put in place last night are so significant that they cannot be kept in place for too long.

“You cannot ask people to sustain this for a very long period. That’s why we are really asking people to double down now for the next two weeks, it’s going to be tough.”

People are allowed to leave home for travel to or from work deemed to be essential, food shopping, medical appointments, brief exercise, farming activity and vital family reasons.

All people over the age of 70, and other people considered vulnerable to the disease, have been told to “cocoon” for the two-week period and not leave home at all.

Non-essential surgery, health procedures and other non-essential health services are being postponed.

All public and private gatherings of any number of people outside a single household or living unit are prohibited.

Social visits to relatives beyond the family unit at home are not allowed.

The death toll in Ireland stands at 22 with a total of 2,121 infected. Three deaths announced on Friday included the first healthcare worker to die from the disease.

As well as the pressure on intensive care beds, health chiefs are concerned that more than 50% of confirmed cases in Ireland involve community transmission and that clusters are developing in places such as nursing homes and residential care settings.

People who leave their homes for exercise are required to stay within a 2km radius.

A list of work and businesses considered to be essential is due to be published over the weekend.

Mr Harris acknowledged it was a stressful and worrying time.

Footballer in court over sex offence against girl aged 14