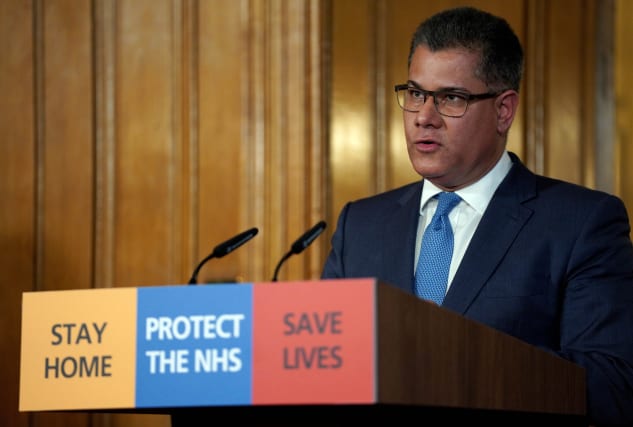 The Business Secretary has insisted there are “no gaps in Government” despite Boris Johnson and three key figures entering self-isolation over coronavirus.

Alok Sharma on Saturday said the Prime Minister is still “leading the response from the front” – behind closed doors in Downing Street – after testing positive.

Scottish Secretary Alister Jack earlier announced he was following guidance and self-isolating after developing mild symptoms, although he has not been tested.

Both the PM and Health Secretary Matt Hancock are confirmed cases while England’s chief medical officer Professor Chris Whitty is self-isolating with symptoms.

Mr Sharma stepped up to take the daily coronavirus press conference after Covid-19 struck at the heart of Government, affecting the key figures tackling the outbreak.

“The Prime Minister has had mild symptoms but he’s absolutely leading the response from the front,” the Cabinet minister said.

“I want to be very clear about that, there are no gaps in Government. We are collectively all working very hard, led by the Prime Minister.”

Despite being sealed into his flat above 11 Downing Street, the PM held a video conferencing call on Saturday morning, Mr Sharma said.

Mr Johnson has been accused of failing to follow his own social distancing rules after key lieutenants followed him into self-isolation over the virus.

The criticism of the 55-year-old Prime Minister, who had a high temperature and persistent cough, is only likely to be amplified by Mr Jack developing symptoms.

Mr Johnson sat next to the MP for Dumfries and Galloway as he took Scottish questions at the despatch box in the House of Commons on Wednesday.

Mr Hancock was to the Scottish Secretary’s other side on the front bench as they gathered ahead of Prime Minister’s Questions.

On Saturday, Mr Jack announced he had developed a mild temperature and a cough “in the past 24 hours” and would continue working from home.

He had travelled back to his constituency as Parliament closed because of the pandemic on Wednesday.

Concerns are rife over which other key figures could be affected, with Chancellor Rishi Sunak having been with the PM shortly before he tested positive.

Neither the Chancellor nor Sir Mark had displayed symptoms by Friday night so they had not been tested and were not in isolation.

The PM and Mr Hancock were only showing “mild symptoms” but will have to spend seven days in isolation.