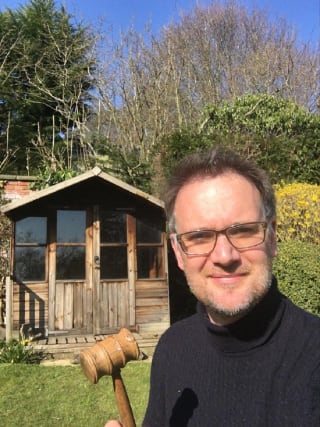 Celebrities are backing a charity auction raising money for the NHS, which is being broadcast online from a garden shed.

The Golden Gavel NHS Charity Auction on April 3 will raise cash for the Derby and Burton Hospitals Charity, covering five hospitals across Derbyshire and Staffordshire.

The man behind the idea, television antiques expert Charles Hanson of Hansons Auctioneers, wanted to support the health service’s frontline workers while sticking with official advice to stay in lockdown.

He is hosting the sale from his own “man cave”, a shed at the bottom of his garden.

Among the lots, pledged by the public, are a set of Millennium song lyrics signed by recording artist Robbie Williams, and a House of Commons autograph book signed by former prime minister David Cameron, ex-shadow chancellor and Labour MP Ed Balls, and broadcaster Fiona Bruce.

Mr Hanson is also putting up for sale two BBC Bargain Hunt golden gavels presented to him in 2004 and 2016, plus his own auction gavel.

He said: “Like everyone else, I’ve been shocked by the impact this terrible illness has had on us all.

“It’s easy to feel sorry for ourselves.

“Our lives have been turned upside, the world is in turmoil and most of us are trapped in our own four walls.

“But at the forefront of it all, fighting to save lives every minute of every day, are our health service workers.

“Those of us in lockdown, the non-essential workers, are the lucky ones.

“We are not seeing the devastation on the front line, the battle to steer chronically ill coronavirus victims back to health, nor do we have to witness loss of life on a daily basis.

“I wanted to do something to help and decided to stick with what I’m best at – auctioneering.”

He added: “I’ve been working flat out to get friends and celebrities from the antiques world to donate lots and hope to raise as much money as possible for the NHS.

“They need protective clothing, they need thermometers, they need tea and biscuits to get them through the day.

“Even if you’re stuck at home, you can do something positive to help.”

Welcoming the sale, a spokesman for Derby and Burton Hospitals Charity said it was working to give every ward, clinic, minor injuries unit and A&E whatever was needed during the Covid-19 outbreak.

He said: “We have been overwhelmed by the kindness and generosity of the community towards our hardworking NHS staff and cannot thank Hansons enough for thinking of us and supporting our NHS.”