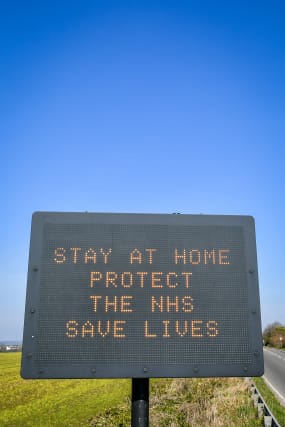 Despite Prime Minister Boris Johnson placing the UK under lockdown on Monday, some people continue to flout advice and are still treating the area as a holiday destination.

Sergeant Hamish Nichols, of Dyfed-Powys Police, said patrols conducted over the last two days had resulted in more than 200 reminders to the public about what currently counts as ‘essential travel’.

“Yesterday we turned away numerous caravans and camper vans whose owners were travelling to Pembrokeshire to self-isolate,” said Mr Nichols.

“We have also spoken to two campsite owners who have been open for business and have issued stern advice to them and to all holidaymakers.

“While the majority of local people have taken the Government guidelines seriously, too many people seem to think the rules do not apply to them.

“The message is clear – this is a lockdown, not a holiday, and anyone who ignores the current restrictions not only puts people’s lives in danger but also risks further action being taken against them.”

Patrols of beaches, coastal areas, and other public spaces will continue this weekend as the weather is forecast to be sunny.

Officers will also be conducting increased stop checks on roads across the force area.

Where members of the public refuse to listen to advice, officers will be able to issue penalty notices of £30, which if not paid within 14 days double to £60.

Individuals who do not pay a fixed penalty notice could be taken to court, with magistrates able to impose further fines.

If an individual continues to refuse to comply, they will be acting unlawfully, and the police may arrest them.

“Enforcement is a last resort, and officers will always apply their common sense and discretion to every situation,” said Mr Nichols.

“But the powers are now available and we will use them if we have to.”

Chief Inspector Louise Harries added: “Our staff are working tirelessly in already difficult times and I ask that people adhere to the simple rules set.

“This will enable us to put our resources towards supporting all agencies in response to this crisis and continuing to protect our communities and victims.”