Thousands tune in to webcam of peregrine falcons at Salisbury Cathedral 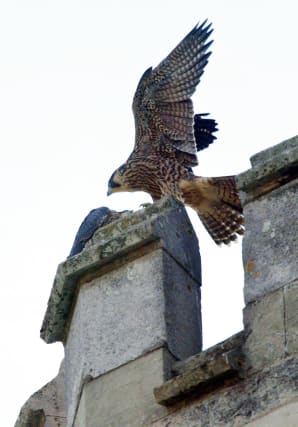 Thousands of people across the UK have been birdwatching through a webcam showing peregrine falcons nesting at Salisbury Cathedral.

Viewing figures for a live stream showing the pair in their nesting box at the base of the spire have skyrocketed in recent weeks.

The unringed female laid her first egg on Mothering Sunday, with a second arriving on Wednesday and a third early on Friday.

Phil Sheldrake, a species recovery officer with the RSPB, said there had been a 16-fold increase in views to the webcam page.

In February to March 2019, a total of 831 people viewed the webcam, but this has risen to a staggering 13,692 over the same period this year.

“It is drawing people in,” Mr Sheldrake said.

“In difficult times, nature is just there, carrying on. The webcam gives us a window into the private lives of a bird we might only get the briefest glimpse of usually.

“Peregrines are a bird that just captivates people’s imagination, they are the fastest animals on the planet, they are stunning to look at and are built for speed.

“They are a very charismatic species.”

The egg laid on Sunday is the earliest first egg since peregrines returned to Salisbury Cathedral in 2014.

There are records of the birds nesting at the cathedral between 1864 and 1953, before a long period of absence caused by persecution and the use of certain pesticides.

It is estimated that the population has now recovered to about 1,500 pairs across the UK.

In 2014, a mated pair successfully produced four fledgling chicks in a nestbox at the Wiltshire cathedral.

Since then, peregrines have hatched and fledged from the tower each year apart from 2018.

“In their natural environment, they are a bird of the mountains and coastal cliffs,” Mr Sheldrake said.

“Salisbury Cathedral to a peregrine will look like a mountain.

“There are not many nesting sites in the area – the cathedral is like a five-star hotel for them.

“They are fiercely territorial and bond for life, but if they lose a partner, they find a new one.”

In 2017, a peregrine falcon named Sally at the cathedral featured on the BBC’s Springwatch.

Sally, fitted with a GPS tracker and ringed, was forced out of her nesting box after a new female arrived in 2018.

Data from her tracker showed she remained close to Salisbury, within 15 miles, until November 3 last year.

“Since then, we don’t know what has happened – did she die, did the tag fall, or has it stopped working?” Mr Sheldrake said.

“Sally was estimated to be aged seven in 2017 and the average lifespan is about 10 years, so it is quite likely that she is no longer here.

“As the years roll on, we learn more and gain these insights.

“This year more people are finding an interest as they are in isolation.”

Those watching the webcam may spot a new egg being laid in the coming days, as there are usually up to four eggs in a clutch.

The mated pair at Salisbury Cathedral will not begin incubating the clutch until the final egg is laid.

Incubation lasts between 29 to 32 days, with the pair sharing incubating and hunting, and chicks should begin to arrive in early May.