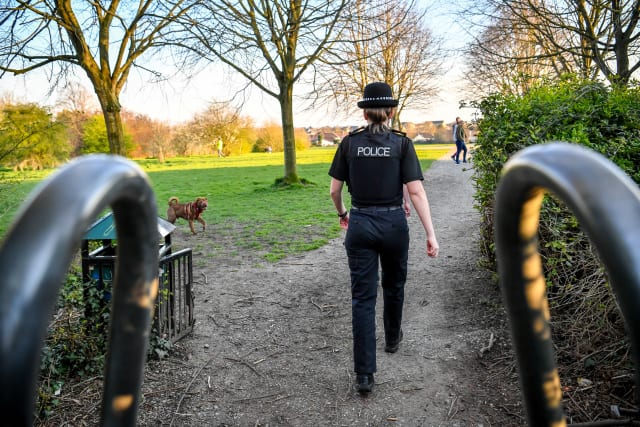 Derbyshire Police have defended using drones to deter people from flouting coronavirus lockdown rules by walking in the Peak District.

The force filmed people in pairs rambling in the Curbar Edge area of the beauty spot on Wednesday, saying travelling to remote areas for exercise did not count as “essential travel”.

The tactic attracted criticism from some, with UK civil liberties group Big Brother Watch branding the move “sinister” and “counter-productive”.

But Superintendent Steve Pont told BBC Radio 4’s Today programme: “We wanted to reinforce the message of stay home and a number of people aren’t staying home, they’re finding excuses or loopholes, reasons not to stay home – and we just wanted to illustrate that this is the wrong thing to do.”

It comes as new powers were announced on Thursday to allow police to enforce lockdown rules brought in to tackle the Covid-19 pandemic.

The Home Office said people who continue to flout tougher restrictions on movement will be breaking the law and could be arrested by police.

Those who ignore the rules could be hit with a £60 fine initially and another for £120 for a second offence, with the penalty doubling for additional breaches.

Officers in England were given the power to enforce rules on staying at home and avoiding non-essential travel as of 1pm on Thursday.

They can order members of the public to go home, leave an area, and have the power to disperse a group, using “reasonable force, if necessary”.

Police can also take steps to make sure parents are stopping their children from breaking the rules.

According to the guidance, the cost of initial fixed penalty notices will be cut to £30 if paid within 14 days and those who do not pay could be taken to court and risk facing costs for unlimited fines.

Refusing to provide a name and address to avoid being given a fine is an arrestable offence.

The Home Office said: “If an individual continues to refuse to comply, they will be acting unlawfully, and the police may arrest them where deemed proportionate and necessary.

“However, in the first instance, the police will always apply their common sense and discretion.”

Known as the Health Protection (Coronavirus, Restrictions) (England) Regulations 2020, similar rules will be in place across Scotland, Northern Ireland and Wales.

The regulations state they are made “in response to the serious and imminent threat to public health” posed by Covid-19 and the Government considers the “restrictions and requirements imposed by these regulations are proportionate to what they seek to achieve”.

The rules will be in place for an emergency period which must be reviewed at least once every 21 days, starting on April 16.