No plans for mass surveillance of social-distancing behaviour – PSNI 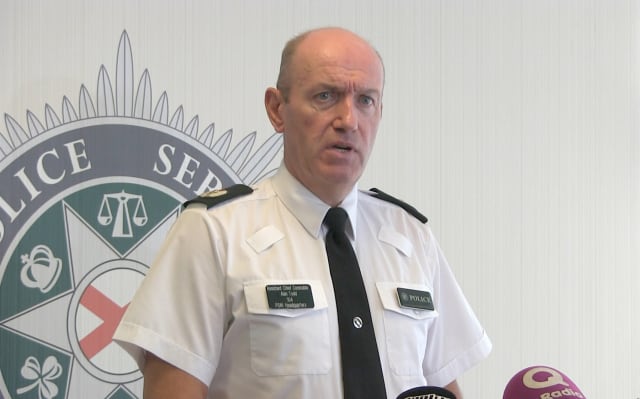 Northern Ireland’s police have no plans for mass surveillance of social-distancing behaviour.

The Police Service of Northern Ireland’s Assistant Chief Constable Alan Todd was speaking after Derbyshire Police received criticism for posting drone footage of a couple walking their dog, as the force urged members of the public not to travel for their daily exercise.

“It’s not the approach that we’ll be taking, we’ll be taking very much a policing with a community and human rights approach… concentrating on the four ‘Es’ of engaging, explaining and encouraging before we involve ourselves in enforcement,” he told the PA news agency.

“And we haven’t any plans or intention at this moment in time to go into mass surveillance including drones.

“They (Derbyshire Police) need to speak for themselves but I’ll not be doing it that way.”

However, Mr Todd also urged people not to drive from their homes to beauty spots for walks, warning it could lead to more scenes such as when more than 100 cars gathered at Murlough Bay, and “situations where social distancing is difficult”.

“I would prefer from a policing perspective that people stayed more locally to their houses and didn’t travel long distances merely to go for a walk,” he added.

Mr Todd said he expects the PSNI to receive beefed-up powers over social distancing by the weekend “at the latest”.

“There is an urgency to that, we’re expecting to see that legislation if not today, certainly over the weekend,” he said.

The new powers are expected to include dispersing groups and issuing fines.

Mr Todd, who is leading the PSNI’s response to the coronavirus pandemic, said he feels they are “well prepared but not complacent” ahead of the surge.

He declined to say how many staff and officers have tested positive for Covid-19 so far.

“I do have the numbers, I monitor them on a daily basis but we’re not making those numbers public at this time,” he said.

“These are hugely challenging circumstances and I think if anyone in my position said they had of all this in hand, they would be complacent.

“So far we have got our policing service on a stable fitting… we have significant plans for the coming weeks and we are now looking to plan beyond that again.”

Mr Todd said there is “no policing requirement” to ask for military assistance.

“This is a healthcare crisis, if the health minister or the Executive have a request for the military to perform a particular function in a particular place, that would be for them,” he said.

“But in terms of policing or policing the streets, I have no requirement.”

He also revealed like retired health workers, former police officers have been offering to return to work to help with the effort.

“The re-training demands that that would create make that a difficult step because of the unique circumstances of policing in Northern Ireland,” he said.

“A significant number of former officers have offered to volunteer for various pieces and we are redirecting to the wider Executive effort to harness volunteers,” he said.

“Cops are cops, when things are hard, they like to step forward and help communities.”