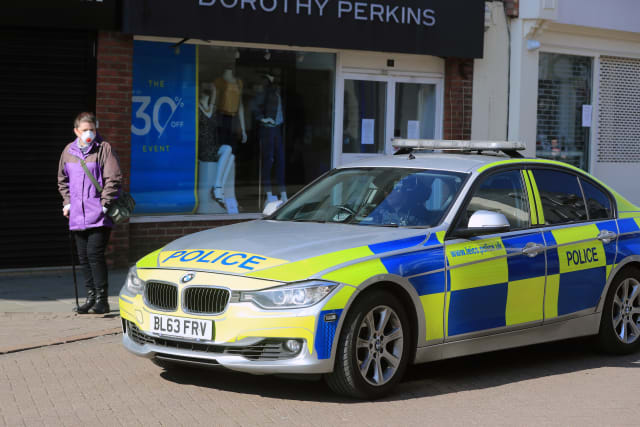 The military could be brought in to bolster police numbers during the coronavirus crisis, with up to a fifth of officers expected to be absent in the Government’s worst-case scenario.

National Police Chiefs’ Council (NPCC) chairman Martin Hewitt said members of the armed forces would take up back office roles which would not involve interaction with the public in order to free up officers for frontline policing.

The news comes as Derbyshire Police defended using drones to deter people from flouting Covid-19 lockdown rules by walking in the Peak District and it emerged Avon and Somerset Police were conducting random vehicle checks in Bristol to ensure only essential journeys are being made.

Speaking to reporters on Friday, Mr Hewitt said: “We are prepared for a significant absence level.

“The Government’s worst-case scenario is on a fifth of our staff being off at any one time.

“Some will be ill, and others will clearly be either self-isolating or caring for people who are ill.”

Mr Hewitt said “we are not close to the worst-case scenario” and that measures such as making use of special constables, encouraging recently retired officers to come back to the service or serving officers to delay their retirement, and cancelling leave are being used to bolster numbers.

Once all of those options are exhausted, “well-rehearsed arrangements” to bring in the military would be considered.

But he stressed: “We are nowhere near that at the moment.

“We are a very considerable way away from that situation at the moment.

“We do not need military help at the moment.”

Any help from armed forces would only be a “backfilling role” to take up work “police officers who do not regularly interact with the public undertake, so they can allow our colleagues to get back and work on the front line”.

Uniformed Home Office staff such as Border Force officers could also be drafted in, he suggested.

While Mr Hewitt admitted there will be things police could no longer do, he insisted there were no types of crime forces would not respond to.

He said police officers who would usually be dealing with incidents at football matches or pubs, clubs and bars have been freed up but warned online crimes and domestic abuse are expected to rise.

There have been some “minor shoplifting offences” which have “received a disproportionate amount of attention” but “we are not seeing looting or significant disorder in supermarkets”, he added.

As of 1pm on Thursday, officers in England were given powers to enforce restrictions on movement in England with fines among other measures.

Known as the Health Protection (Coronavirus, Restrictions) (England) Regulations 2020, similar rules have been put in place in Wales and Scotland and are also expected to be enacted in Northern Ireland.

Mr Hewitt said he expected officers to take a “common sense approach” to policing but urged people to take the restrictions seriously by limiting trips out of doors to prevent spreading the virus, adding: “This is a national emergency. It is not a national holiday.

“There’s absolutely no intention to be heavy-handed but the message needs to be got across to people.”

When asked about reports that people were deliberately coughing at police officers while claiming to have coronavirus – which could see them sent to jail for up to two years – Mr Hewitt said: “Quite frankly, the thought that anybody does that disgusts me and they should be dealt with very seriously.”