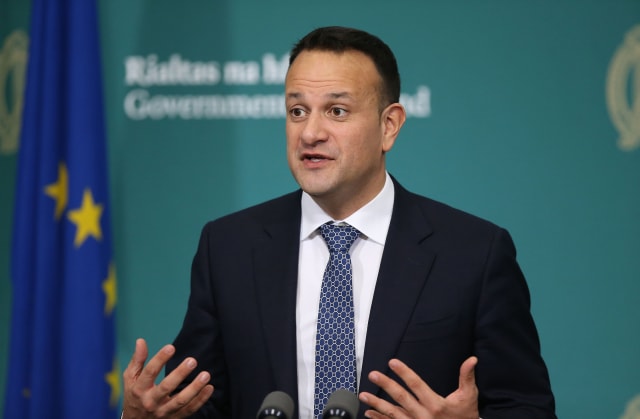 Ireland’s intensive care units will be at capacity “in a number of days”, Taoiseach Leo Varadkar has said.

Mr Varadkar said that while there are currently a number of empty beds, the situation would change over the coming days, adding that it would become “very difficult”.

“The way things are heading indicate that ICU will be at capacity in a number of days,” he said.

“That’s already the case around Europe, it may happen here. We have to plan for that.

“We need to make sure we have capacity, ventilators, all of those things.

“An unprecedented effort is being made by the health service to tool up, to recruit, to provide additional capacity, to do all the things we need to use.

Mr Varadkar said that people seeking a three-month payment break on mortgages and loans should not be forced to pay additional interest.

Mr Varadkar also said that people who can pay mortgages and loans during the coronavirus crisis should continue to do so.

Speaking in Dublin on Friday, he said: “I’ve a very simple message to the banks, and that is that if people cannot pay their mortgage and cannot repay their loans, then they should extend their loans by three months, give people a three-month break and add to the end of that loan the three extra months.

“That’s the right thing to do, that’s the fair thing to do, and it actually makes sense for the banks to do that in the longer term.

The Taoiseach was visiting fruit and vegetable wholesaler Total Produce in Swords where he and Minister for Business Heather Humphreys were given a tour.

Mr Varadkar said the total death toll from coronavirus was “impossible to predict”.

“It would be a surprise, and a very pleasant surprise, if the number of deaths at the end of this was less than 1,000.”

Mr Varadkar also said that construction sites that cannot implement social distancing should be shut down.

He added: “Even arguably housing for homeless people so that they are not in overcrowded accommodation, but it does need to be done by social distancing.

“That can never be done perfectly.

On Friday, a public health expert said he believes the UK will be left with a “high burden of coronavirus cases” following its response to the Covid-19 outbreak.

Dr Gabriel Scally, president of Epidemiology and Public Health at the Royal Society of Medicine in London, said there will be populations across the UK with a high exposure to the virus.

The UK Government has been urged to change its response to tackling the spread of coronavirus by health experts.

Prime Minister Boris Johnson said only those seriously ill in hospital would be tested, advising anyone with symptoms to self-isolate at home for seven days.

The Republic of Ireland, like many other countries, is following international advice from the World Health Organisation (WHO).

Speaking to RTE Morning Ireland, Dr Scally, who led the CervicalCheck review in Ireland, said: “A big difference is that the UK is making no effort to control the spread of the virus in the community by testing for cases and by contact tracing, and so the United States, the UK and Sweden are the three real outliers on this.

“Those three countries are taking a different route.

“I think the end game is going to be really very, very different.

“There are going to be a high burden of cases, particularly in the US, and I think in the UK as a result of what they’ve done or rather what they’ve not done.

“When we get past this – what is likely to be a very large surge – we’re going to end up with populations in the UK with a high exposure to the virus.

“So a lot of people will have had it compared to the Republic of Ireland and other European countries, and it will then be difficult to lift some of the restrictions, particularly around travel and so on because the two countries, the two groups of countries, will be in completely different places.

“Personally, I think there’s no doubt in my mind that the Republic of Ireland is taking exactly the right course, based on international experience, and the very best advice.”

Dr Scally said that, “even more importantly”, this would “buy time for some of the drug trials to take place, so we can treat people more effectively”.

He made the comments as the coronavirus death toll in Ireland more than doubled after 10 further victims lost their lives to the virus.

A total of 19 people infected with Covid-19 have now died in the country.

There were 255 new confirmed cases of Covid-19 in Ireland announced on Thursday evening, bringing the total number of cases to 1,819.

Of the 10 latest victims, three were female and seven were male. Nine were from the east of the country and one in the south.

It included measures that aim to prevent evictions and implement a rent freeze throughout the health crisis.