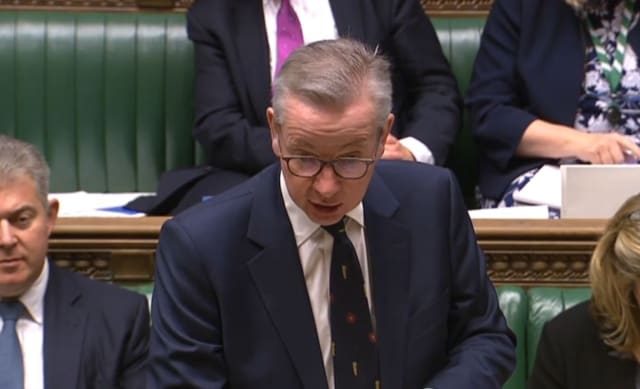 Post-Brexit negotiations on a trade deal with the European Union will continue next week despite the UK and much of the continent being on a coronavirus-enforced lockdown.

Cabinet Office minister Michael Gove will co-chair the talks via video conference in a bid to push forward on securing an agreement with Brussels in line with what was set out in the Withdrawal Agreement.

Downing Street has continued to insist that the Government will not request to put back the December deadline for a deal to be reached.

The Prime Minister’s official spokesman, when asked about a possible extension to the transition period, told reporters on Friday: “In terms of the timetable, there is no change from our point of view.”

The first meeting of the joint UK-EU committee is due to take place by video conference on Monday March 30, with Chancellor of the Duchy of Lancaster Mr Gove leading for the UK and European Commission vice-president Maros Sefcovic chairing for Brussels.

The PM’s spokesman said the meeting next week would “oversee the implementation, application and interpretation of the Withdrawal Agreement and will seek to resolve any issues that may arise from it”.

“The meeting will happen remotely instead of in-person given the developments of coronavirus, and so we are considering alternative ways to host it, such as conferencing or conference calls,” said the No 10 spokesman.

“The UK delegation will include the Chancellor of the Duchy of Lancaster and Paymaster General Penny Mordaunt.”

Boris Johnson announced on Friday he had tested positive for coronavirus, while Health Secretary Matt Hancock has also been infected with the deadly illness.

The PM’s Europe adviser David Frost is self-isolating having contracted Covid-19, as is his counterpart, chief Brussels negotiator Michel Barnier.

Mr Gove has not been tested for the virus, according to his wife and journalist Sarah Vine.

The former education secretary had been responsible for leading on Britain’s no-deal preparations before the Withdrawal Agreement was ratified in October.