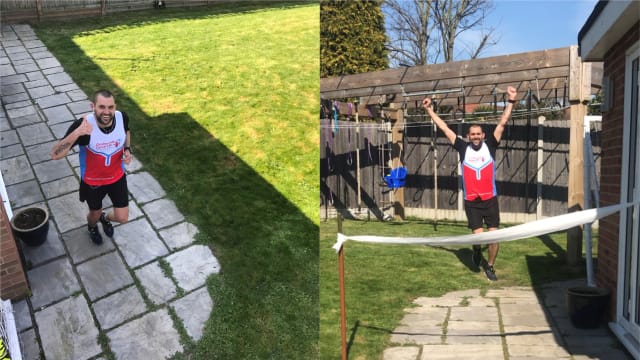 A man in Kent decided to run a marathon in his garden so his months of training would not go to waste.

James Page, 36, from Sidcup, had been in training for an ultra-marathon and the London Marathon, but both were postponed due to the coronavirus pandemic.

Mr Page plans to run those races later in the year, but in the meantime he put his hours of hard graft to use by completing 26.2 miles in his back garden.

“It wasn’t as hard as I thought,” he told the PA news agency. “I actually quite enjoyed it in a weird way.”

The runner has raised more than £3,000 for Children With Cancer UK during his training, a cause close to his heart after both his parents were diagnosed with cancer in the last 18 months.

Running around his garden and switching direction every 20 minutes or so to protect his knees, Mr Page completed 873 laps in just under five hours.

“I was hoping to get it done in a really good time and beat my previous marathon times,” he said.

“But when you’re running in almost a circle in your garden, the corners are quite tight, so you can’t build up enough speed, otherwise you’d be having to bang the brakes on every corner.”

Mr Page said the laps were around 50 metres each, with a toilet roll finish line, created by his son, the source of some stick online.

“I put it on Facebook and all anyone seemed to be bothered about was ‘oh, you’re wasting toilet roll!'” said Mr Page.

But perhaps the biggest impression Mr Page left was on his lawn, which took 873 laps of punishment in the process.

“I’ve trodden down all the grass, from out the window you can see a perfect trek of the loop I was running,” he said.

Children with Cancer UK is organising the ‘Together as One’ run, set to take place on the original day of the London Marathon, April 26.

It is encouraging people to use their daily exercise to run wherever they can in the UK between 9.30am and 10.30am to raise money for childhood cancer research.

Donations to Mr Page can be made at: https://uk.virginmoneygiving.com/JamesPage20