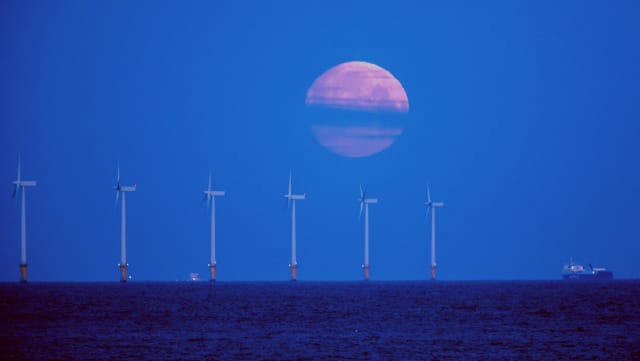 A key factor in falling greenhouse gas emissions is the shift in the energy sector away from coal power towards gas and renewables such as wind and solar power, and biomass.

Last year, the share of electricity generation by renewables increased to 36.9%, a record high, separate figures from the Business and Energy Department (Beis) reveal.

The increase helped push low-carbon electricity, which also includes nuclear power, to a record 54.2% share of the generation mix, up from 52.6% in 2018.

There were record levels of power from both onshore and offshore wind, with new turbines coming online, such as Hornsea offshore wind farm in the North Sea – the biggest such development in the world.

Overall, wind provided a fifth of the UK’s power in 2019, equally split between onshore and offshore wind farms.

Energy minister Kwasi Kwarteng said: “These new figures show the extraordinary progress the UK has made in tackling climate change, with emissions falling 45% since 1990.

“With record-breaking levels of renewable electricity on the grid we are well-placed to build on these efforts in the months and years ahead, while continuing to support the economy through the coronavirus outbreak.”

“This will continue as we build a modern energy system, moving away from fossil fuels to reach net zero emissions as fast as possible.

“As well as wind, we’ll use innovative new technologies like renewable hydrogen and marine power, and we’ll scale up battery storage.”

And she added: “Low-cost renewables are central to the Government’s energy strategy and our sector will grow rapidly in the years ahead, as our domestic supply chain expands and we continue to seize multi-billion pound export opportunities around the world.”

The provisional figures also show a drop in transport emissions, which has become the biggest source of pollution as the energy sector has cleaned up.

In 2019, there was a 2.8% reduction in emissions from transport on the previous year.

Since 1990, the baseline year, pollution from transport has fallen 4.6%, while energy sector emissions have tumbled by almost two-thirds (62.8%) in that time, the data shows.

The UK has met the first two of its five-yearly “carbon budgets”, which set out the emissions cuts needed to meet long-term legal targets to tackle climate change.

But climate advisers have warned more action is urgently needed as the UK is off-track to meet carbon budgets in the coming years.

Dominic Cummings: I don’t regret what I did

Dominic Cummings defends himself over trip to Durham