The experts leading the fight against Covid-19 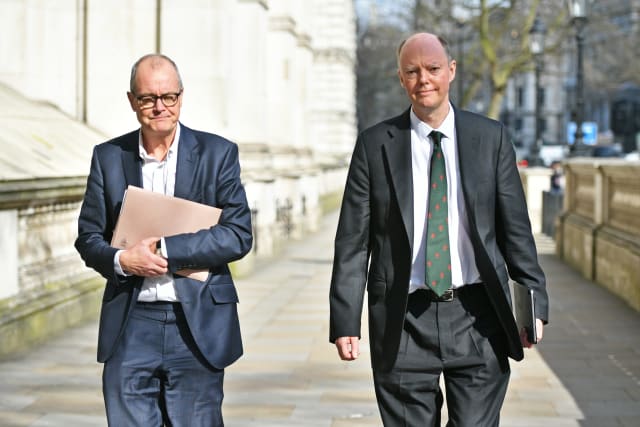 They were relatively unknown before the country was gripped by the coronavirus pandemic, but now our lives may depend on them.

These are the scientists and medical experts who are at the forefront of the fight against Covid-19 in the UK.

As England’s chief medical officer (CMO) since October 2019, Professor Chris Whitty, 53, has been instrumental in the Government’s response to the pandemic.

He gives expert advice to ministers on the best course of action to limit the spread of the virus, which has influenced Government policy during the outbreak.

The public will have seen him stood alongside Prime Minister Boris Johnson at press briefings in Downing Street, helping to relay the Government’s plans and answering questions on the science behind the decisions made.

He has also appeared in the Government’s TV adverts in which he explains to viewers the latest advice on keeping safe.

Prof Whitty is an NHS consultant physician and epidemiologist with an extensive background in the study of infectious diseases, including Ebola.

He also acts as the UK Government’s chief medical adviser and chief scientific adviser for the Department of Health and Social Care.

He took on the role in 2018, succeeding the current CMO Prof Whitty, and provides scientific advice to the Prime Minister, and advises the Government on aspects of policy on science and technology.

He often appears in press briefings with Prof Whitty and Mr Johnson to update the public on the latest coronavirus advice.

During his time as president of research and development at pharmaceutical company GlaxoSmithKline (GSK), between 2012 and 2018, new medicines for cancer, asthma and HIV were discovered and approved for worldwide use.

Previously he taught at St George’s Hospital Medical School – where he studied medicine in 1978 – for nearly a decade, before becoming professor of medicine at University College London medical school.

He was knighted in the 2019 New Year Honours list for his services to open clinical science.

Dr Jennifer Harries is one of two deputy chief medical officers who supports CMO Prof Whitty, both of whom were appointed to their roles in June 2019.

She was previously regional director for the South of England at Public Health England (PHE) for six years.

She has appeared in several press conferences, in some cases in Prof Whitty’s stead when he has been unavailable.

After qualifying as a doctor in Birmingham, Dr Harries went on to gain formal qualifications in pharmacology, medicine and health economics.

Dr Harries has worked in clinical, policy, evaluation and research roles in countries including New Zealand, Pakistan, India, Kenya and the Caribbean.

She was appointed OBE in the 2016 New Year Honours list for services to public health.

Professor Neil Ferguson is a mathematician and epidemiologist at Imperial College London with a specialism in the study of infectious diseases which spread in humans and animals.

He heads Imperial College London’s Covid-19 response team which has modelled the spread and impact of the coronavirus in a Government-commissioned report.

In the report, he warned that a mitigation strategy of herd immunity may have led to the deaths of an estimated quarter-of-a-million people in the UK, with the NHS being overwhelmed.

Prof Ferguson said in his report that suppression could limit the deaths to thousands or tens of thousands but over a longer period of time.

The Government subsequently announced it would follow the suppression strategy, which saw the implementation of strict measures to stop the virus spreading between people, such as social distancing and self-isolation.

Prof Ferguson has used mathematical modelling to provide data on disease outbreaks including the swine flu pandemic in 2009 and the Ebola epidemic in Western Africa in 2016.

On March 18, he developed symptoms of Covid-19 and went into self-isolation having already attended press conferences at Downing Street.

He has spoken as part of the Government’s team in tackling Covid-19 at press briefings at Downing Street.

In one such press conference, he said the NHS was “working night and day” to try to increase the capacity of critical care beds.

This week, he said the NHS could start testing hundreds of thousands of people per day for Covid-19 within a matter of weeks.

He has pushed the message from the CMO in encouraging people to stay at home and self-isolate if they are showing symptoms, and to seek advice on the dedicated coronavirus NHS website.

Prof Powis had previously been the medical director of the Royal Free London NHS Foundation Trust for 12 years, after studying medicine at the University of Oxford.