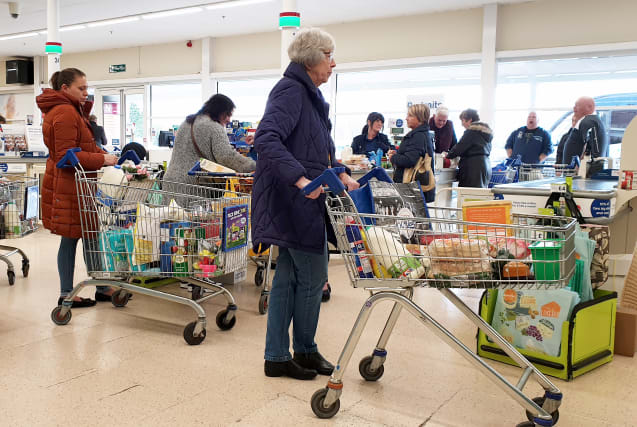 A surge in stockpiling in supermarkets offset the slump in high street footfall as retail sales flatlined in March, according to new figures.

The Confederation of British Industry’s (CBI) latest retail trends survey revealed that sales in the sector were stagnant in the two weeks from February 26 to March 13.

However, it reported a “sharp divergence” across the sector as coronavirus fears drove more shoppers towards supermarkets.

Grocers reported “exceptionally strong growth” in the period, with 94% of firms reporting higher than normal sales.

Other specialist food and drink businesses also reported a surge in sales as shoppers looked to fill up their pantries ahead of potential self-isolation.

Meanwhile, the survey, which took place prior to the Government’s increased restrictions on shop openings, suggested that households have been “putting off purchases of non-essential items”.

The CBI also said that online retailers saw sales growth slow to a below-average pace, as shoppers held back on spending.

It said it now expects retail sales volumes to fall sharply in the year to April, with retailers saying they are more pessimistic than at any time since April 2009.

Orders placed with suppliers also fell for the 11th consecutive month, despite a strong rise in orders placed by grocers.

Ben Jones, principal economist at the CBI, said: “These are extraordinary times for the retail sector.

“Grocers are seeing a temporary increase in demand because of coronavirus.

“But many other retailers are seriously suffering as households put off non-essential purchases and social distancing keeps people away from the High Street.”