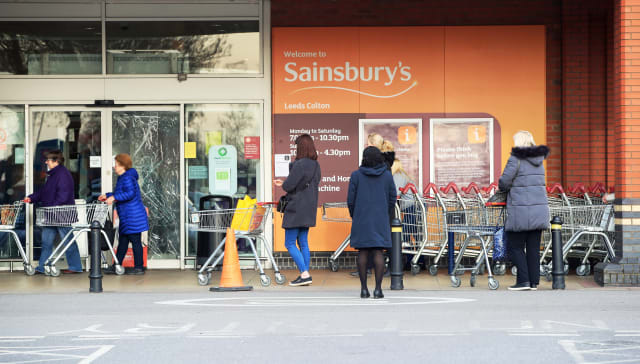 Some of Britain’s biggest retailers are introducing stricter measures at stores to ensure that customers stay safe as they pick up essentials, while other shops are closing their doors.

Tesco and Asda both plan to limit the number of customers allowed into their shops at any given time, and introduced other new rules.

“Our social distancing plans aim to protect customers from the moment they enter our car parks, to browsing products, to paying and finally exiting our stores,” he wrote.

Meanwhile, from Wednesday morning, shoppers at Asda have seen similar changes, including markers on the floor to help customers keep two metres apart, barriers, signs and announcements. The supermarket has also asked shoppers to ditch cash in favour of card payments.

Lloyds Pharmacy said that only two customers would be allowed into its stores at any one time. The chain will adopt a strict two-in two-out policy, it said on Wednesday.

“We need to ensure people keep two metres apart and that we give our colleagues the time to dispense medicines safely and in a timely way. We are asking customers to be a little more tolerant of waiting times and, at times, this may mean waiting outside the pharmacy,” said chief executive Toby Anderson.

Lloyds also said it is looking to fill 1,500 vacancies. These will firstly be filled by staff moving from other areas, and staff members’ family members will also be given preference.

Lidl has announced it will install new donation boxes in store to collect for vulnerable families, extending a scheme that has been in place since 2017.

All non-essential stores have been forced to close as Britons are told to stay inside as much as possible, and only leave for supplies and a short daily exercise.