Masked robber caught out by his forearm tattoo 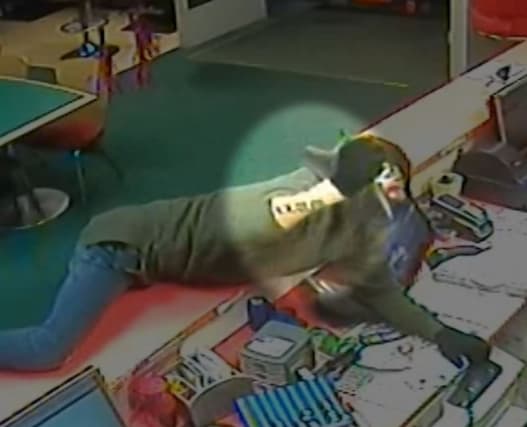 A masked robber who was caught when he accidentally flashed his distinctive forearm tattoo during a raid has been jailed for seven years.

Justin Stockbridge, 45, was part of a gang of four men who robbed convenience stores, bookies and taxi drivers in London, Buckinghamshire, Hertfordshire and Surrey armed with knives and axes.

All of the raids were carried out under the cover of darkness late at night or in the early hours of the morning between October 6 2018 and March 18 last year.

Stockbridge, of Rickmansworth, Herts, was caught out while targeting a betting shop in Chesham, Buckinghamshire, when his tattoo was picked up on CCTV as he threatened the cashier with a knife.

He was convicted of one count of robbery at Isleworth Crown Court on Friday and jailed on Wednesday.

Fellow gang member Jamie Owen, 32, of Chipperfield, Hertfordshire, was jailed for 14 years after being convicted of three counts of robbery and one count of possession of a taser.

A third man, Richard Mazzuccato, 34, also of Rickmansworth, pleaded guilty to four counts of robbery at the same court in August last year and is due to be sentenced on April 28.

Paul Evans, 27, of no fixed address, previously admitted three counts of robbery and was jailed for 11 years and one month.

He was arrested midway through the gang’s crime spree on December 4 2018.

All four men were tracked down by members of the Met’s Flying Squad through a combination of number plate tracing, cell site phone data analysis, forensics and CCTV.

When he was arrested in April last year in a suburb of Rickmansworth, Stockbridge was driving a van that was linked to the final robbery that took place in Beaconsfield in Buckinghamshire.

Stockbridge and Mazzuccato were both drug addicts, with Mazzuccato telling the court his crack cocaine habit costs him £100 a day.

Owen was not tracked down until last summer because he had been jailed for four months for possession of a machete.

He was finally charged with the robberies on August 6.

Detective Sergeant Tim Fines, from Flying Squad, said: “I have no doubt that these suspects would have continued committing this horrific spate of robberies if they had not been identified and arrested.

All of the robberies were terrifying ordeals for the victims – thankfully none of them suffered serious injuries during the attacks.

“These suspects were not afraid to use violence, often just for small amounts of cash.”

He thanked officers from the Hertfordshire, Sussex, Surrey and Thames Valley constabularies for their assistance with the investigation.