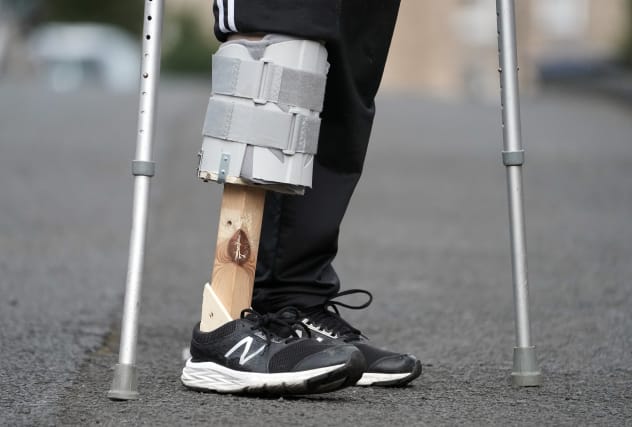 An amputee has praised his practical wife after she fashioned a prosthetic leg for him from items she found in the shed.

Atchari Watson, 46, stepped in to action to help her husband Steve get around their house in Shotley Bridge, County Durham, after they were told he would have to wait months for one on the NHS due to the coronavirus crisis.

He said her first attempt, using a seaside bucket, fibreglass resin and a piece of wood, made him look like Long John Silver and kept sliding off.

But a second try with half a moon boot and wood from the shed was better and it will allow him to get in the garden and walk around their house.

Mr Watson, a teaching assistant who was in the Army, said: “My wife is very practical. She can turn her hand to anything.

“At first when I saw her rummaging around in the shed I thought she was going to do the garden.

“The next thing, she had one of our son’s seaside buckets and an old piece of wood. It was more akin to something Long John Silver would wear.”

He added: “The next day when she came home from work, she got a moon boot from when I had a cast on my leg, cut it in half and used screws to attach it to a piece of wood and it’s absolutely brilliant.”

The father-of-three, who used to run a Thai restaurant and takeaway with his wife, suffered a badly broken leg when he fell 5ft in 2018.

Following a series of operations, he agreed to have the lower part of it amputated in January.

He last week but the hospital appointment was cancelled due to the Covid-19 outbreak.

Mr Watson said: “I am not going to use this regularly but it will be good for getting around the house for the next three to six months.

“I desperately do not want to divert anybody in the NHS away from anything more important.

“There are people far worse of than me at the minute.”