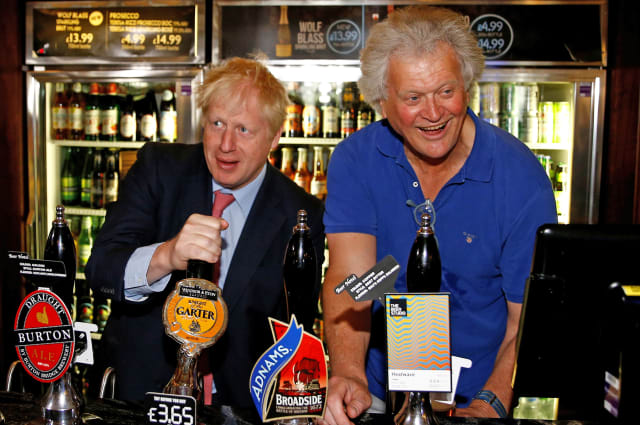 Wetherspoons founder Tim Martin has told staff to “go work at Tesco” instead as the pub firm warned them they could face delays over pay.

The company, which employs 40,000 people, shut all its pubs on Friday after Boris Johnson ordered sites to shut until further notice in response to coronavirus.

In a video message to staff, Mr Martin suggested its workers could find employment at supermarkets while its pubs remain shut.

He said the pub group will pay staff for all work done until the shutdown, when its pubs last opened, but will not make any further payments to staff until the Government fulfils its promise to cover 80% of the wages of workers impacted by the virus.

The founder said: “I’ve very sorry about the situation that’s occurred with our pubs.

“I know that almost all our trade now has gone to supermarkets.

“Not only our trade, but the trade from cafes, leisure centres and restaurants.

“So we have had lots of calls from supermarkets, Tesco alone want 20,000 people to join them.

“That’s half the number of people who work in our pubs.

“If I’m honest, I say you can get the furlough payments and stay at home.

“If you’re offered a job at a supermarket, many of you will want to do that.

“I can completely understand it.

“If you’ve worked for us before I promise you we will give you first preference if you want to come back.”

Workers criticised Mr Martin’s stance, writing a letter backed by the Bakers, Food and Allied Workers Union (BFAWU), comparing the group to companies such as Costa, which has promised to pay staff for the next eight weeks.

Ian Hodson, president of the BFAWU, said: “He is ignoring the advice of the Government to stand by your workers and instead abandoning them in their time of need.

“They need to pay rent, buy food and because of the low wages he’s always paid them will not have savings to depend upon.

“His selfish approach says unless the Government puts money into my bank account today he’ll let the workers who have made him rich suffer.

“It is completely unacceptable.”

A Wetherspoons worker, who wished to remain anonymous, said: “To be told the company won’t pay you until the Government grant is enacted at the end of April is hard enough.

“I’ll be homeless in two weeks with no income.

“Getting told it by Tim Martin, drink in one hand, ending with a half-hearted and sadistic ‘good luck’ is another thing all together.

The company said it believes its actions “are responsible and sensible in the difficult circumstances” and criticised a “complete misinterpretation of what Wetherspoon said” in press reports.

Wetherspoon spokesman Eddie Gershon said: “Wetherspoon sent a video by the chairman Tim Martin, a letter from chief executive John Hutson and other information to all employees.

“In those communications it made clear that all employees would get paid this Friday for all work carried out until the pubs shut.

“After that, the company would utilise the Government ‘furlough’ scheme, which pays 80% of wages, details of which are in the course of being finalised between licensed trade representatives and the government at the present time.

“As we understand it, tens of thousands of hospitality workers and others have already lost their jobs, but Wetherspoon is retaining all its employees, using the Government scheme for the purpose for which it is intended.”