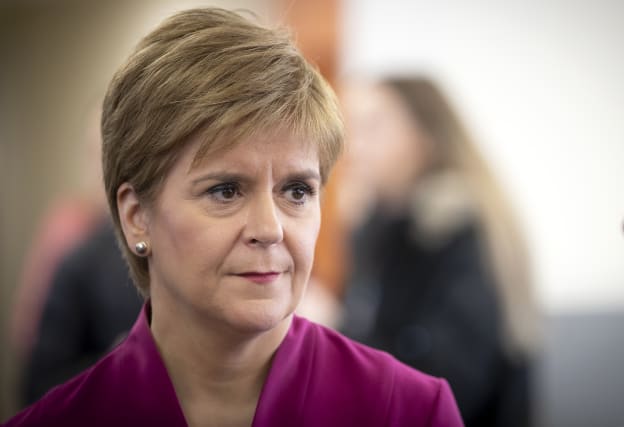 Nicola Sturgeon has told Scots that staying at home is “the only way of saving lives” as the number of people infected with Covid-19 continues to grow.

The latest figures show 584 people have tested positive for the disease – up by 85 from Monday – and 16 people have now died as a result of coronavirus in Scotland.

With stricter measures preventing all but essential shops from opening and requiring people to stay at home apart from other limited reasons, Ms Sturgeon said she is “confident” the vast majority of Scots will comply with the new rules.

“And that right now must be the priority of each and everyone of us.”

She continued: “The changes we are asking people to make to their lives, difficult though they are, are absolutely essential.

“And they are essential to save lives.”

“As I have said previously for all of us right now life should not be feeling normal, if it is then you are almost certainly not sticking to the rules we are asking people to abide by.”

The First Minister was clear construction sites should “be closed unless the building that is being worked on is essential, such as a hospital”.

She added the Scottish Parliament “rightly is also changing how we operate” – with some chairs having been removed from the chamber to make sure MSPs sit a safe distance apart.

While the First Minister stressed “MSPs must continue to perform a very important scrutiny role” she added it had been agreed that until the Easter recess at least, Parliament will only meet for one day a week rather than three.

Speaking about the new restrictions, she said: “All social events are now banned and public gatherings of two or more people, excluding households or for essential work-related purposes, are also prohibited.

“Communal places, such as libraries and playgrounds must close, place of worship should also close, other than for funerals, which I am deeply sorry to say must now be restricted to immediate family.”

While children whose parents do not live together can continue to move between households, Ms Sturgeon stressed they should “take hygiene and social distancing precautions”.

Health Secretary Jeane Freeman said plans already announced to double the number of intensive care bed had been increased, with the target upped to more than 700.

She added: “A pipeline of ventilators is slated to come to Scotland over the coming weeks to enable this increase and we are working with suppliers to do all we can so that they can be brought here as soon as is humanly possible.”

The Health Secretary also stressed it is “critical” to protect those at the highest risk from infection – who have already been asked to self-isolate for the next 12 weeks.

They will receive a “package of support” coordinated by newly-established humanitarian assistance centres, which will offer deliveries of medication and food, along with help managing medical conditions.

Ms Freeman told the chamber there will be a “new national contract” put in place to facilitate food deliveries but it is unclear what this entails.