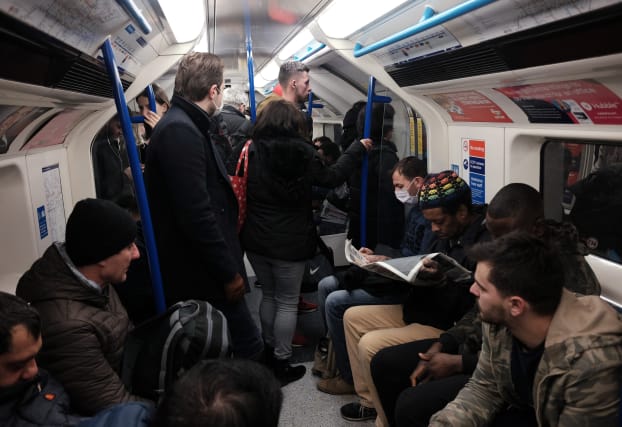 British Transport Police (BTP) will be available to stop non-essential workers from travelling on the London Underground, the force said.

There is growing concern about rush hour Tube carriages remaining packed despite orders for only key workers to use public transport to slow the spread of the coronavirus.

A BTP spokeswoman said the force recognises it has “an important role to play with our partners in helping ensure that only those making essential journeys for work are using the Tube and rail network”.

She added: “Our officers will be on hand to support rail operators if people are clearly disregarding the advice.”

Transport for London (TfL) – which is chaired by Mr Khan – has suspended the Circle line and Waterloo & City line, and reduced frequencies on other parts of the Tube network.

Bus services have also been cut.

The mayor said “growing numbers” of TfL staff are off sick or self-isolating, which means “we cannot run more services than we currently are”.

He added that many people still travelling are on zero-hours contracts, work in the gig economy or are freelancers.

He said that a “proper package of support” from the Government for these workers “would alleviate this situation”.

Transport Secretary Grant Shapps said he had spoken to Mr Khan about ensuring there is “enough space to be safe” on London Underground trains for those who must travel, and offered the support of his department.

He urged passengers to only use the Tube “when essential”.

Nurse Julia Harris, who commutes to work at Imperial College NHS Trust, said she had left earlier and changed her route in a bid to avoid crowds but still found services busy.

She told the PA news agency: “Seats on the train all had at least one person so people needed to stand, and the District line was busy as well. I still don’t think things have improved as a large amount of people are commuting early in the morning.

“It is concerning because I have to come to work. The choice isn’t there and my commute is quite long. I worry for my health more on my commute than actually being in the hospital.”

Ms Harris said the reduction in TfL services meant “you now have more people waiting and piling onto the Tubes and trains”.

“The issue is key workers aren’t just health professionals – I think we under-estimated how many people are needed to keep things running.”

Nicola Smith, who works at a central London hospital, said she was “risking my health” to commute by Tube because it was so busy.

She called on TfL to increase services or the Prime Minister to “start policing who’s getting on”.