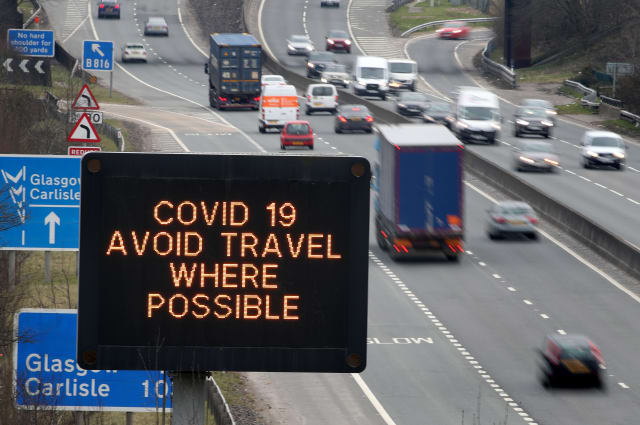 UK industrial output saw the largest slump on record as measures to halt the spread of coronavirus dealt the economy a severe blow, according to new figures.

Economists said the new data revealed that “a recession of a scale we have not seen in modern history” is increasingly likely.

The flash IHS Market/CIPS composite purchasing managers index (PMI), a preliminary report before final figures are released next week, gave a reading of 37.1 in March. It fell from 53.0 in February.

The survey, which was compiled between March 12 and March 20, reported the most dramatic decline since the series of figures was first started in 1998.

Chris Williamson, chief business economist at IHS Markit, said: “The surveys highlight how the Covid-19 outbreak has already dealt the UK economy an initial blow even greater than that seen at the height of the global financial crisis.

“With additional measures to contain the spread of the virus set to further paralyse large parts of the economy in coming months, such as business closures and potential lockdowns, a recession of a scale we have not seen in modern history is looking increasingly likely.”

The slump was heavily driven by the services sector, which saw output plummet as people were told to shun pubs, restaurants and leisure venues due to the pandemic.

It was significantly worse than previous lowest reading of 40.1 in November 2008, after footfall completely subsided.

Measures to stem the spread of coronavirus particularly impacted hotels, restaurants and other leisure activities such as sports centres, gyms and hair salons, the survey said.

Meanwhile, manufacturing output also dipped lower, falling to 44.3 in March, from 52.2 in February, in the largest decline since 2012.

The survey said that only producers in the food and drink, and chemicals and plastics sectors reported growth of output in March, as other sectors were hit by international factory shutdowns.

Duncan Brock, group director at CIPS, said: “Just as the economy began to strengthen at the beginning of the year, the shock of this deepening global health crisis has flung businesses into the abyss, with the worst overall downturn in manufacturing and services for more than two decades.

“The services sector received the largest blow as citizens reduced their social activity and leisure activities were abandoned.”

The Bank of England slashed interest rates to a new historic low of 0.1% and unleashed another £200 billion to boost the economy last week in its second major emergency move to help combat the impact of the virus on the UK economy.

“Many manufacturing businesses have already paused work, while services are feeling the pinch as they try to adapt to new ways of working and the economic turmoil.

“Encouragingly, governments like ours are taking proactive steps to curb the economic fallout.”