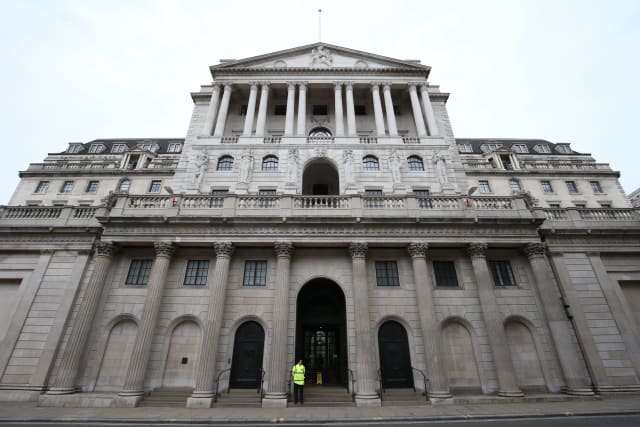 The Bank of England has warned the shock from coronavirus to Britain’s lenders is set to be greater initially but less prolonged than the doomsday scenario in its annual stress tests.

The Bank’s Financial Policy Committee (FPC) said the disruption caused by the Covid-19 outbreak is likely to be “more severe” than the stress test scenario in the first phase.

But in minutes of its recent meetings, the FPC said the overall economic hit is expected to be less than the scenario it uses in its annual health check of the banking sector.

The committee added: “The FPC expected that it would ultimately be less protracted and lead to less output loss overall over the course of two years than the ACS (annual cyclical scenario) which contained a very prolonged fall in output.”

It gave assurances that the UK’s financial system remains resilient and can withstand a “severe market and economic disruption”.

The FPC – whose job it is to monitor the stability of Britain’s financial system – also confirmed it stood ready to take any “further actions deemed appropriate”.

It has already announced a decision to lower bank capital buffers to bolster their lending power by an extra £190 billion as part of the Bank’s initial package of measures to tackle the economic shock of Covid-19 – which came alongside the initial interest rate cut.

The Bank has since slashed rates again to a new all-time historic low of 0.1% and unleashed another £200 billion of quantitative easing to boost the economy, to add to a new facility to encourage banks to lend as much as £100 billion to small businesses.

The FPC revealed that before the Bank’s actions were taken, wholesale funding costs for lenders had “increased markedly across the board” since mid-February.

But it said: “Together with the new term funding scheme, this action meant that banks should not face obstacles to supplying credit to the UK economy.”

It said it would “monitor closely the response of banks to these measures as well as the credit conditions faced by UK businesses and households more generally”.

The FPC has cancelled this year’s stress tests, the results of which are usually announced in December.

It said this would free up resources at the Bank and lenders to instead react to the coronavirus crisis.

It will instead use lenders’ own in-house stress testing, combined with the Bank’s desk-based analysis.